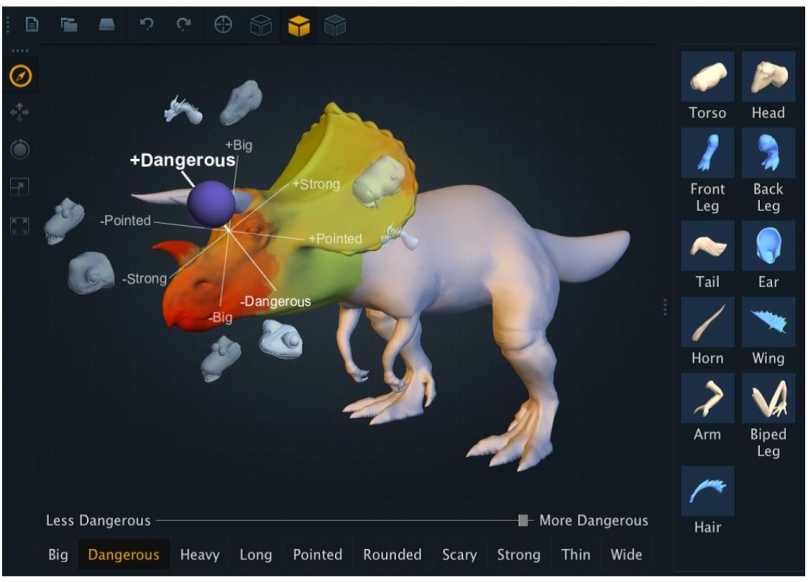 A NEW SOFTWARE PROGRAM MAKES IT EASY for novices to create computer-based 3-D models using simple instructions such as “make it look scarier.” The software could be useful for building models for 3-D printing and designing virtual characters for video games.

The program, called AttribIt, allows users to drag and drop building blocks of a 3-D shape from a menu. Next the user can adjust the characteristics of the model — making it “scarier” or “sleeker” for example — by sliding a bar at the bottom of the screen.

“We wanted to create a program that could be used by people who don’t have any training in computer graphics or design,” said Siddhartha Chaudhuri, a lecturer at Cornell University who co-wrote the software while a postdoctoral researcher at Princeton with Professor of Computer Science Thomas Funkhouser as well as University of Massachusetts-Amherst Assistant Professor Evangelos Kalogerakis and graduate student Stephen Giguere.

“The challenge was to build a tool that could create a model — such as an intricate animal with claws and ears — with only simple commands and common adjectives instead of the complex geometric commands found in most other 3-D design programs,” Funkhouser said.

AttribIt makes new objects by combining parts from repositories of previously made models, Chaudhuri explained. The parts in the repository have been ranked for their “scariness,” “gracefulness” and other everyday adjectives using machine learning algorithms trained on feedback from anonymous volunteers.

The rankings are based on crowd-sourced training data from Amazon Mechanical Turk, an online research platform. Random participants are asked to view two shapes and say which one is scarier. The AttribIt software then builds a model from these value judgments that predicts the relative “scariness” of any shape.

“For example, given a bunch of animal heads, the software assigns each a number which expresses how ‘scary’ it thinks that head is,” Chaudhuri said. “You can sort the animal heads by this predicted scariness to get a sequence that goes from bunnies to velociraptors.”

The researchers tested AttribIt on users who had no prior 3-D modeling experience, including Chaudhuri’s 11-year old nephew. “People were very good at creating models in a very short amount of time,” Chaudhuri said.

In addition to creating 3-D models, the approach can be used in design tasks such as making a website look “more artistic.” The research was supported by funding from Google, Adobe, Intel and the National Science Foundation and was presented at the Association for Computing Machinery Symposium on User Interface Software and Technology in October 2013.