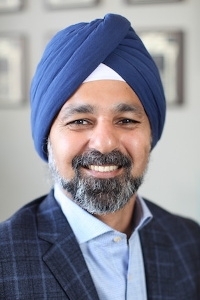 Jaswinder Pal Singh, professor of computer science, has been named the inaugural Professor of Computer Science, Technology, and Societal Change.

The endowed professorship is associated with the Princeton Center for the Decentralization of Power Through Blockchain Technology. The center is co-directed by Singh and Andrea Goldsmith, dean of engineering and the Arthur LeGrand Doty Professor of Electrical and Computer Engineering.

Singh's research focuses on parallel computing systems and applications, and the implications of parallel systems for software and architectural design. He joined the computer science department in 1995 after completing his doctorate at Stanford University and bachelor's degree at Princeton. Singh is a co-author of Parallel Computer Architecture: A Hardware/Software Approach, a primary textbook in parallel computing, and has authored several patents. He has been a consultant to Intel, Microsoft and the U.S. Government, and also founded two companies. Among other honors, he was the recipient of a Sloan Research Fellowship and the Presidential Early Career Award for Scientists and Engineers awarded by the National Science Foundation.