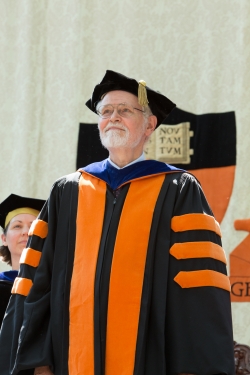 Professor Brian Kernighan was awarded the President’s Award for Distinguished Teaching at the 2016 commencement ceremonies.   Established in 1991, the award recognizes excellence in undergraduate teaching by Princeton faculty members.

Kernighan makes complicated material reachable to students within our department and across the campus.  In COS 333, Advanced Programming Techniques, he teaches how to build complex, team-designed computer applications to COS majors with no prior experience in this endeavor.  In COS 109, Computers in our World, our department's course for non-majors, he teaches the essence of sophisticated computer science concepts to non-technical students.  These are large classes that he makes feel like seminars by creating an atmosphere where each student feels recognized and valued.

"What impresses me the most about Professor Kernighan is the genuine interest he takes in his students and the effort he makes to stay in touch after graduation. Undergraduates often seek his advice on class choices and careers. His mentorship and influence last well beyond the walk through FitzRandolph Gate---visit his office during Reunions and you'll see a line of students waiting to stop in and say hello,'' said Adam Ernst, class of 2010.

Professors Michael Cook, the Class of 1943 University Professor of Near Eastern Studies; Robert George, the McCormick Professor of Jurisprudence and professor of politics; and Celeste Nelson, associate professor of chemical and biological engineering also received awards. 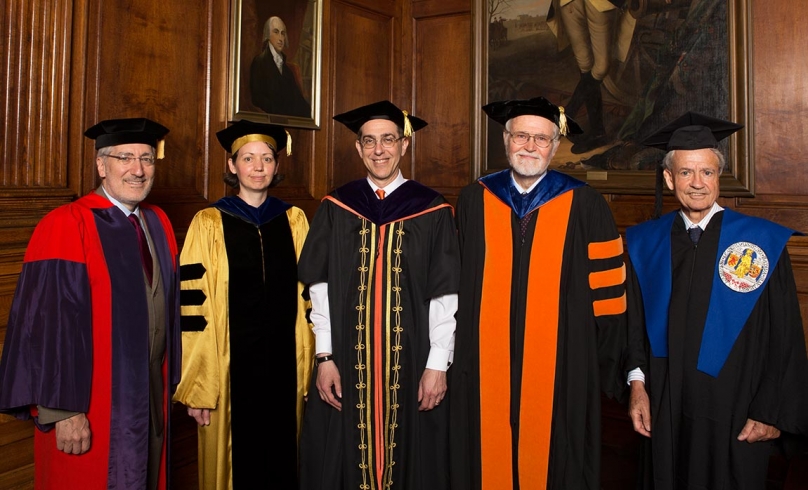 On Commencement Day, Princeton President Christopher L. Eisgruber (center) meets with the faculty members recognized with the President's Awards for Distinguished Teaching: (from left) Robert George, the McCormick Professor of Jurisprudence and professor of politics; Celeste Nelson, associate professor of chemical and biological engineering; Brian Kernighan, professor of computer science; and Michael Cook, the Class of 1943 University Professor of Near Eastern Studies. (Photo by Denise Applewhite, Office of Communications)