by John Sullivan, Office of Engineering Communications
Part of the SEAS COVID-19 Research and Service series 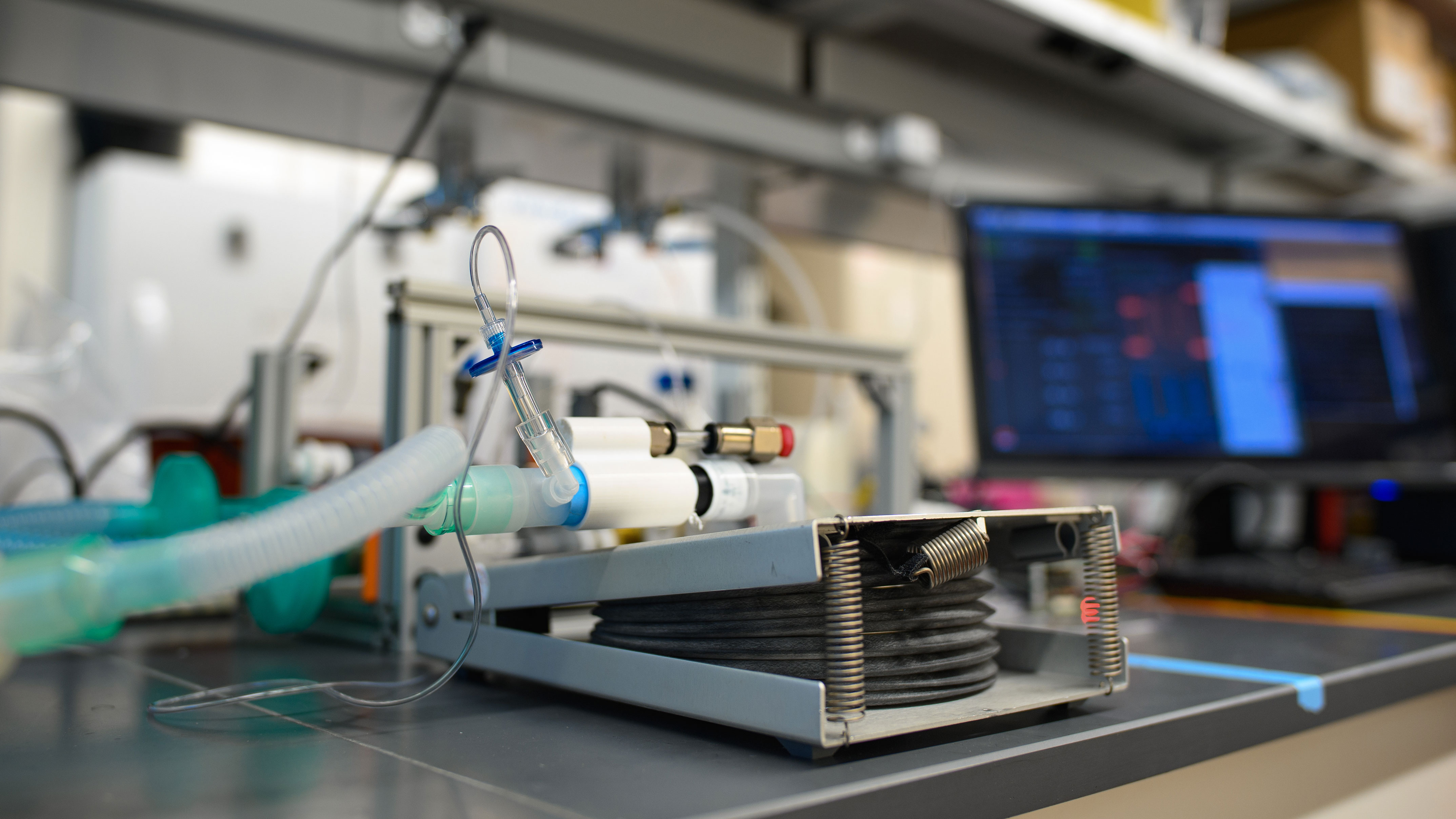 Researchers at Princeton and Google are using a ventilator designed and built at Princeton in an effort to automate and improve controls for all types of ventilators. Photo by Aaron Nathans.

Spurred by the demands of the COVID-19 pandemic, researchers at Princeton and Google are applying mechanical engineering and artificial intelligence in an effort to increase the availability and effectiveness of ventilation treatments worldwide.

Ventilators and their support equipment are lifesaving technologies, but they are also expensive and complex devices that require expert attention from doctors and other highly trained medical workers. The devices must be carefully calibrated and monitored to ensure they are meeting a range of parameters — pressure, volume, breath rate — tuned to each individual patient. Often, these measures change during treatment, requiring further tuning.

Researchers at Princeton led by Daniel Cohen and Elad Hazan thought that much of this monitoring and adjustment could be handled by artificial intelligence. If computers could handle more of the job, it could not only lessen the burden on medical workers but also allow ventilators to be deployed in areas with shortages of expert operators. 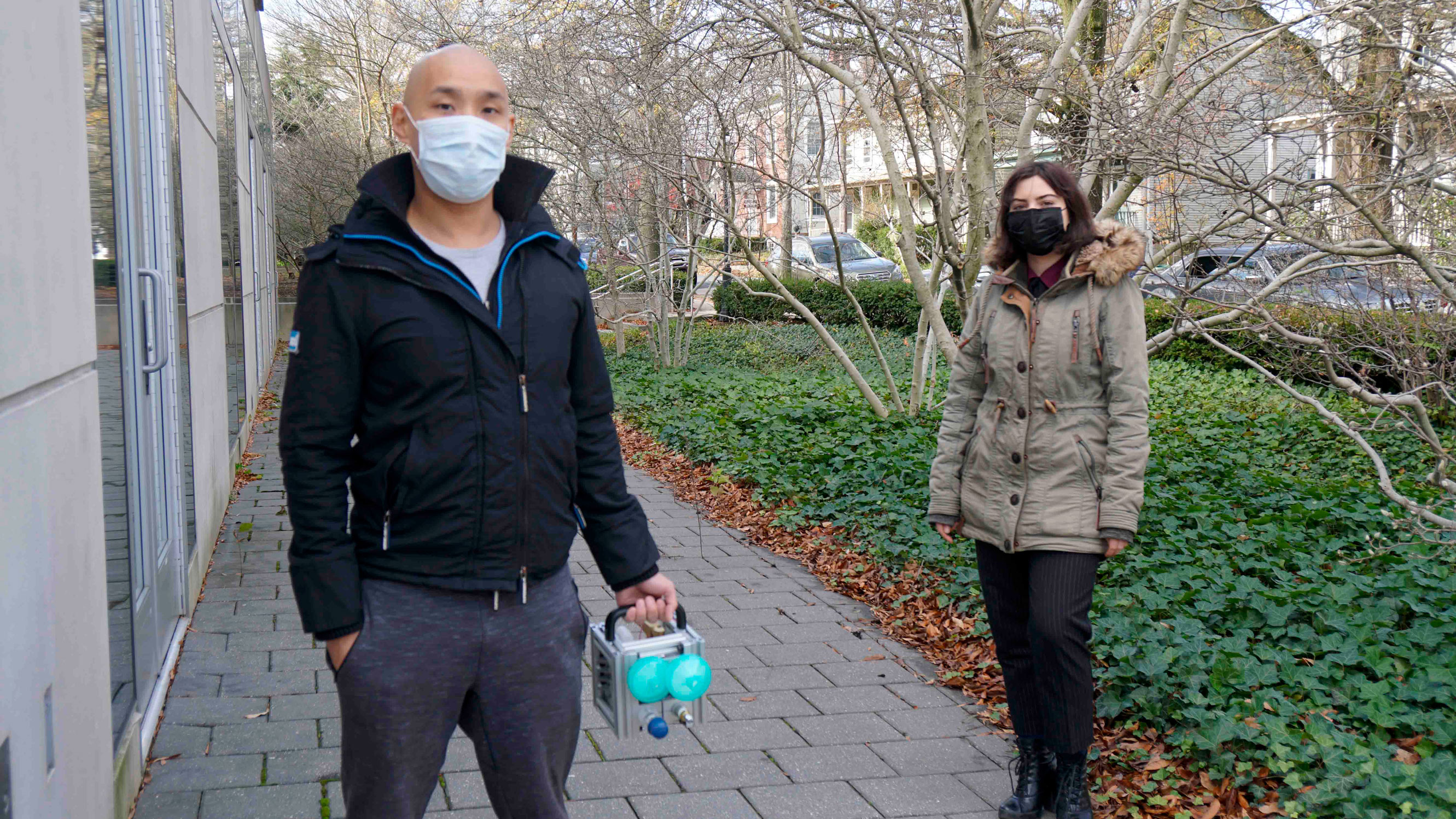 The project stemmed from a new ventilator designed and built by a team led by Cohen, an assistant professor of mechanical and aerospace engineering. Since the early COVID-19 outbreak last spring, Cohen’s team had been working to design low-cost ventilators using readily available parts. Initially, Cohen met with Hazan to discuss a control system for the new design. But the researchers realized that artificial intelligence could improve controls for all ventilators, not just the type designed at Princeton.

The meetings led to the question “Can we improve people’s health by improving the control methods used by the ventilators?” said Hazan, a professor of computer science and director of Google AI Princeton.

As is typical for medical devices, the Princeton ventilator design would have to undergo a thorough review before it could be used with patients. In the near term, however, the machine could play a critical role in allowing researchers to improve systems used to operate other ventilators. Most modern ventilators are controlled through a standard algorithm, known as PID, for continuously monitoring and adjusting a device. These PID algorithms, dating to the early 1900s, are used to control many popular automated devices such as cruise controls in cars.

“The hypothesis is that applying AI tools can improve on these older methods from classical control theory and can make the systems more robust and safer,” said Hazan, who brought together a team that included senior Paula Gradu; graduate students Xinyi Chen, Udaya Ghai, Edgar Minasyan, Karan Singh and Daniel Suo; and recent Ph.D. graduates Naman Agarwal and Cyril Zhang.

Access to a working ventilator has been critical. The physics underlying breathing is complex, and breaking the gas/fluid dynamics down into working equations is generally impractical and inaccurate. So instead of approaching the control problem through the physics of the lungs, the researchers decided to run experiments on the Cohen team’s ventilators and apply machine learning to “learn” from the experiments. If the approach worked, artificial intelligence would not need to solve the underlying physics. Instead, it would uncover patterns in the data that would guide the safe and effective operation of the ventilator. Hazan said the early results have been promising, and the research team is preparing a scientific article on the approach. He said it would not have been possible without a way to accurately simulate ventilator operations.

“That is why the collaboration with Professor Cohen is so essential,” he said. “They already had an open source setup that we were able to use.”

Designing a low-cost ventilator that “goes together like Legos”

The development of the ventilator began as part of an effort by Cohen and Daniel Notterman, a physician and lecturer with the rank of professor in molecular biology, to respond to needs of the regional medical community during the COVID-19 pandemic. During the outbreak last spring, medical experts feared that the country might run short of ventilators, and the researchers set out to design a new system that was inexpensive and could be assembled from off-the-shelf parts. 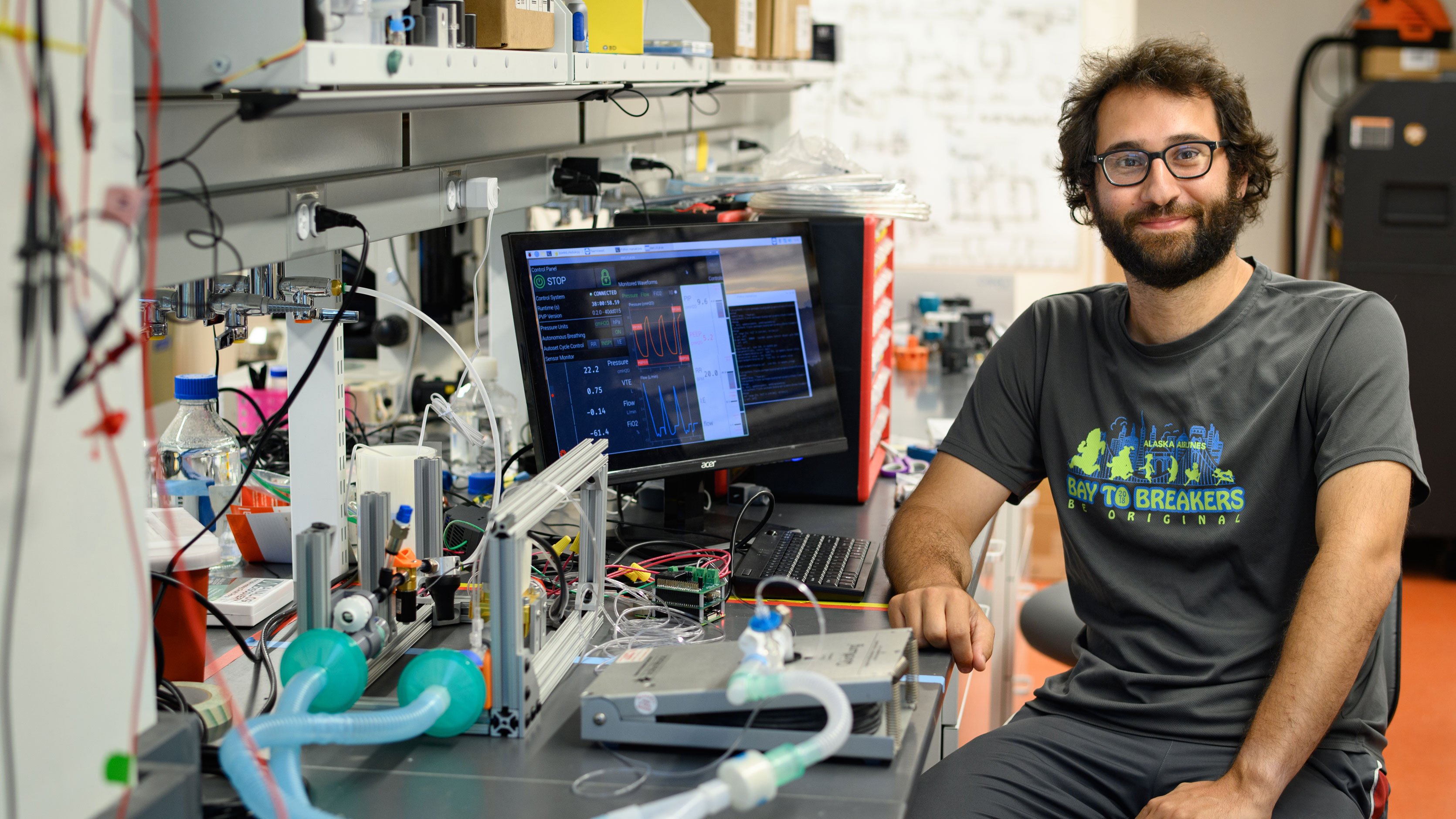 Tom Zajdel, a post doctoral researcher, is part of the team that designed and built a new ventilator at Princeton. The open-source design uses readily available parts. Photo by Sameer A. Khan

“Modern ventilators seek to maximize clinical outcomes while at the same time protecting patients from excessive levels of pressure and volume,” said Notterman, who is a board certified pediatric intensive care physician with experience managing patients with respiratory failure. “Although conceptually simple, the regulation of ventilator performance is extremely complex. This effort provided the opportunity for experts in programming, engineering and clinical medicine to rethink many of the usual solutions, under the leadership of Professor Cohen.”

LaChance, who worked as a researcher at General Electric before coming to Princeton, said the plan was to build a ventilator that could be easily assembled from off-the-shelf parts and that could meet a variety of clinical requirements.

“It basically goes together like Legos,” she said. “I picture my high school robotics team putting this together.”

The team worked on two prototypes. One was built in Hoyt Labs under the direction of Zajdel, a post-doctoral researcher in Cohen’s lab with a background in electrical engineering who has been instrumental to completing the performance testing, said Cohen. The other is in a garage in Rensselaer, New York, undergoing fine-tuning to the design and compiling of full documentation to be shared with the community. “Like a lot of people, I am not on campus right now,” LaChance said. “So I started a ‘garage build.’”

The ventilator is now fully built and meets key performance standards set forth by the FDA, while costing less than $1,500 — a tenth or twentieth the price of commercial ventilators, Cohen said. The first version is known as PVP1 — for the “People’s Ventilator Project” — to emphasize the completely transparent and open nature of the project. Cohen added that a key to the project was combining carefully designed, modular hardware with a flexible, reliable and open software foundation that opens up the potential of the machine. “The team has really worked fantastically well together, despite strict remote operations, three different time zones spanning 12 hours, and a frenetic pace,” said Cohen.

Cohen said LaChance played a key role in obtaining engineering standards used to build the new ventilator. Documents containing standards, developed by international standards organizations, are usually purchased by companies that want to develop new machines. Because multiple standards are needed for a single device, and each standards document can run to thousands of dollars, the cost can be prohibitive for non-corporate designers.

On a Sunday in March, LaChance and another designer, AJ Ortiz, met virtually with representatives of the U.S. standards organization that oversees such devices, the American National Standards Institute (ANSI), to ask them to open the ventilator standards on an emergency basis. The ANSI representatives agreed.

“ANSI is proud to support the crucial efforts of Princeton and many groups engaged in the combat against COVID-19 by providing free, read-only access through our portal to 37 critical international standards from the International Organization for Standardization (ISO) and the International Electrotechnical Commission (IEC),” said Mary Saunders, ANSI vice president of government relations, who earned a master's degree from the Princeton School of Public and International Affairs in 1979. “In creating the portal, ANSI proactively reached out to ISO and IEC to gain approval for opening access to these standards, which were identified by U.S. companies, agencies, organizations, and universities — including Princeton — as being essential to their response efforts.”

Cohen said the team has worked to meet the engineering standards while rethinking approaches to many of the challenges imposed by the pandemic, such as reduced availability of parts and financial stress on hospitals and medical facilities.

Besides working with Hazan’s research group on improving controls, the ventilator team is now actively seeking manufacturing partners to help push for regulatory approval, especially in less affluent countries in need of ventilators both now and after the COVID-19 pandemic.  The researchers are also exploring the suitability of the system for cost-effective and safe pediatric ventilation.

“We have been using robust, simple parts that we put together with a lot of very well done software and coding,” said Cohen. “We are trying to develop a generalized platform that anyone can work with, or improve upon, anywhere in the world, even after the pandemic.”