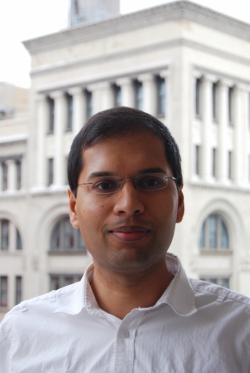 Subhash Khot
Subhash Khot, who earned a Ph.D. from Princeton’s Computer Science Department in 2003, has won the Rolf Nevanlinna Prize, awarded every four years for outstanding contributions in mathematical aspects of information sciences.

With the award to Khot, the CS department now has close ties to three of the nine winners of the Nevanlinna prize since the award was established in 1982 by the International Mathematical Union (IMU), which promotes global cooperation in mathematics.

Khot’s award recognized his work on the Unique Games Conjecture, which the IMU said “will be driving research in theoretical computer science for many years to come.”

Khot, 36 years old, is a theoretical computer scientist in New York University's Courant Institute of Mathematical Sciences. In 2010, the National Science Foundation selected him to receive the Alan T. Waterman Award, a prestigious grant of $500,000 over three years that supports an outstanding researcher under the age of 36.

The CS Department's other winners of the Nevalinna Prize are professor Robert Tarjan and alumnus Avi Wigderson.

Tarjan, who received the first Nevanlinna Prize, is currently the James S. McDonnell Distinguished University Professor of Computer Science. Wigderson, the 1994 winner, earned his Ph.D. in 1983 and is a math professor at the Institute for Advanced Study, where he organizes activities in computer science and discrete mathematics.