Printer Friendly
December 11, 2017
By Doug Hulette
Professor Aarti Gupta, who joined the Department of Computer Science as a full professor in 2015, has been named a fellow of the Association for Computing Machinery, considered the world’s preeminent computing society. 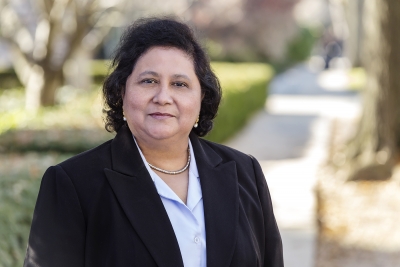 Fellow is the group’s highest membership grade, and the ACM recognized her “for contributions to system analysis and verification techniques and their transfer to industrial practice.” Gupta’s work focuses on formal verification of systems, program analysis, and automatic decision procedures for logics.
She was one of 54 new fellows honored as “men and women whose tireless efforts, dedication, and inspiration are responsible for groundbreaking work that improves our lives in so many ways.” The association cited their seminal work in areas including artificial intelligence, bioinformatics, computer graphics, cloud computing, and software engineering.
Gupta earned a Ph.D. in computer science from Carnegie Mellon University and a bachelor of technology degree in electrical engineering from the Indian Institute of Technology (Delhi, India). Before joining the CS department at Princeton, she worked at NEC Labs America, where she led research in system analysis and verification, making contributions to algorithmic foundations and practical applications of hardware and software verification.
She has served as an associate editor for Formal Methods in System Design (since 2005) and for the ACM Transactions on Design Automation of Electronic Systems (2008-2012). She is currently serving on the steering committee of the International Conference on Computer Aided Verification (CAV).
Gupta, who will be honored in June at an awards banquet in San Francisco, joins more than a dozen other Princeton CS faculty members who are ACM fellows:
• Nick Feamster (2016) for data-driven studies of Internet security and Internet censorship;
• Adam Finkelstein (2014) for contributions to non-photorealistic rendering, multi-resolution representations, and computer graphics;
• Margaret Martonosi (2009) for contributions in power-aware computing;
• Sanjeev Arora (2008) for contributions to computational complexity, algorithms, and optimization that have helped reshape our understanding of computation;
• Jennifer Rexford (2008) for contributions to network control and management systems;
• Edward Felten (2007) for contributions to security and the public policy of information technology;
• Larry Peterson, senior research scholar, (2000) for research in the design and implementation of software for networked systems;
• Andrew Appel (1998) for significant research contributions in the area of programming languages and compilers, and important contributions to the ACM Transactions on Programming Languages and Systems;
• Kai Li (1998) for fundamental contributions to computer systems and architecture, by introducing and demonstrating the effectiveness of Shared Virtual Memory;
• David Dobkin (1997) for pioneering the development of computational geometry as a field, and for leading the technology transfer of theoretical algorithms to practical problems in computer graphics;
• Robert Sedgewick (1997) for seminal work in the mathematical analysis of algorithms and pioneering research in algorithm animation;
• Bernard Chazelle (1996) for fundamental contributions in the design and analysis of algorithms in computational geometry; and
• Robert Tarjan (1994) for fundamental achievements in the design and analysis of algorithms and data structures.