Adora’s founders weren’t anticipating a pandemic when they started creating a virtual campus visit company in 2019, but the lessons they learned in Princeton’s classrooms and beyond helped them seize the moment and transform their idea into a runaway success.

You might recognize them by their tiny red flags or by the adept way they walk backward on cobblestones -- campus tour guides are the hallmark of colleges and universities across the country and often one of the first impressions prospective students receive of an institution. For many students, these tours are a transformative moment that helps them imagine what their next few years will look like, but for some these tours can leave them feeling disconnected instead.

Adora, a digital college visit platform co-founded and operated by Raya Ward '21, Joseph  Rubin '22, and Ron Miasnik '22, is solving this problem by offering prospective students personalized tours -- both virtually and in person -- for a number of institutions across the country. These tours are designed to hone in on prospective students’ niche interests and expand access to elite universities like Princeton. After a whirl-wind experience prototyping and launching their product during a pandemic, Adora has now been acquired by Full Measure Education, a higher education technology provider. 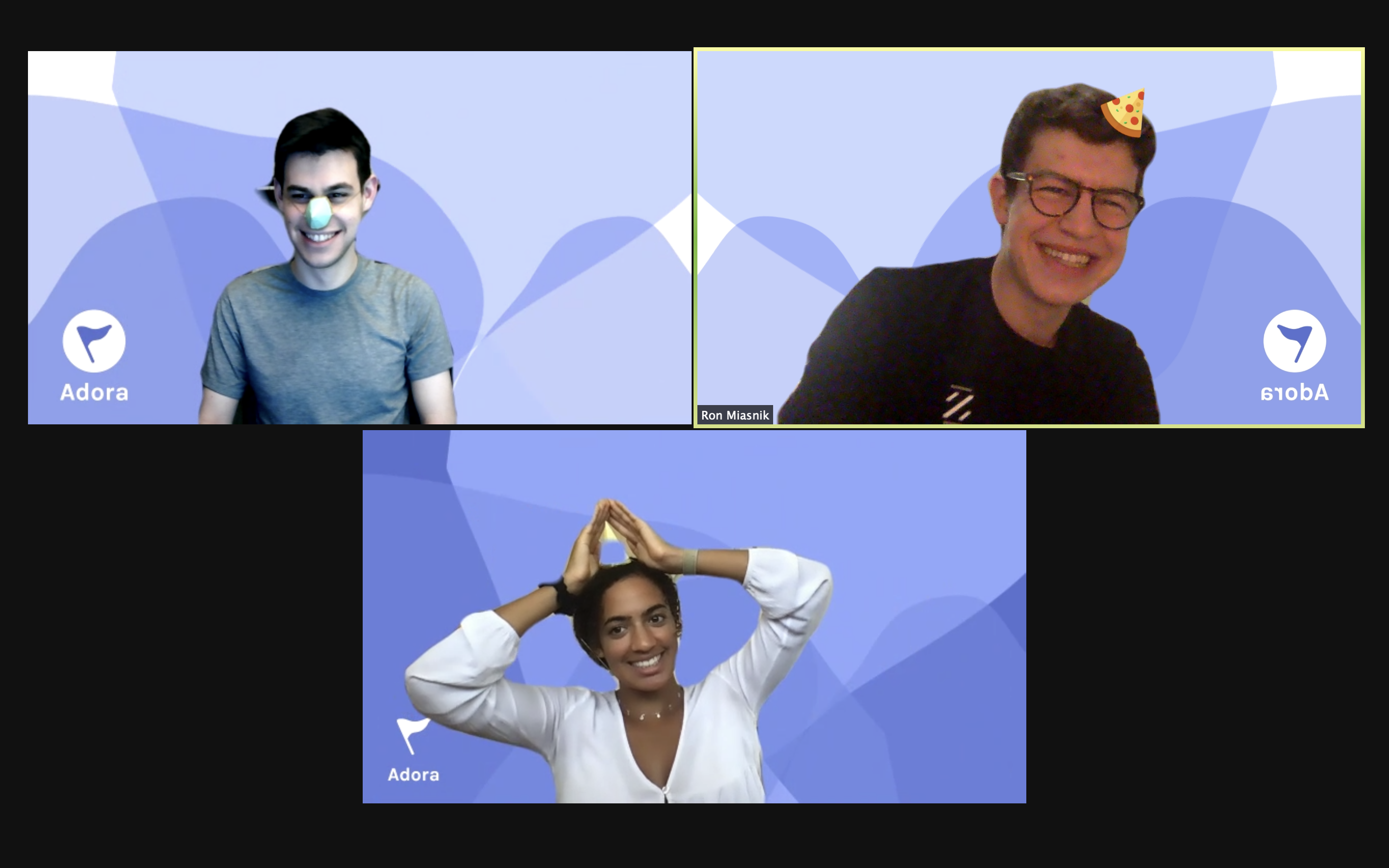 (Top left to bottom center) Co-founders Rubin, Miasnik, and Ward together in a Zoom conference. Photo courtesy of the students

Miasnik says the idea began as a reaction to a friend’s visit to Princeton’s campus.

“He was a kid that I had known for years, a childhood and family friend, and he had been a physics genius ever since I've known him,” says Miasnik. “He knew Princeton had a great physics program, but he'd been on campus for five hours and at that point hadn't heard the word physics once.”

An example of a personalized tour Adora might generate for students visiting Princeton. image courtesy of the students

Ward, an independent concentrator in Human-Computer Interaction and Design, has been a Princeton tour guide herself and says that while guides try to personalize a one-size-fits-all tour template for their students, it’s often impossible to address everyone’s needs or interests equally. And Miasnik says this is only the tip of the iceberg when it comes to accessibility of campus tours.

“Tours are inherently leaving out a lot of people,” he says. “That could be anyone from those who show up in the afternoons or on weekends to more urgently those who can’t afford to come to campus, or international students.

Miasnik, who grew up alongside his father’s Silicon Valley startup, was determined to find a solution to this problem and says there was one clear path that came to mind: creating a digital service that could fill the gaps of traditional campus tours. But he knew he couldn’t do it alone.

He teamed up with Rubin, a fellow CS student, and Ward, to work together on a product that would not only run smoothly but be intuitive and exciting to use.

When the team began designing what would become Adora, Miasnik says they were primarily focused on how integrating augmented reality could expand the campus tour experience, but that trajectory took a turn when campuses around the world began closing in March 2020 in response to COVID-19.

“Everyone we talk to is like, ‘Did you come up with this during COVID?’ but no, we'd been months into the process of building it,” explains Ward. “Which is our silver lining of COVID. When it hit and we started to see things change, we kind of as a team got to sit there and be like, ‘Whoa, we already have part of the solution to this.’”

Apart from that timing, Miasnik says that a huge part of Adora’s success can be credited to the ecosystem of entrepreneurship found at Princeton that offered the team support during the early stages of designing Adora. The team at the Office of Admission also provided support -- as well as an initial launchpad for the platform.

Faculty also provided key support. Miasnik says that COS 448: Innovating Across Technology, Business, and Marketplaces taught by J.P. Singh and Robert Fish was instrumental in motivating the team and providing tools to take Adora from an idea to a successful product.

Prospective students can use both a mobile app and web page to browse Adora’s personalized tours. Image courtesy of the students

For Singh, helping students make that transition was a goal in creating the course in 2011. Singh says it filled a gap in Princeton’s computer science course offerings by teaching students not only technical skills required of a startup CTO (Chief Technology Officer) but also teaching students how to understand and advance the business side of a startup. Singh had experienced the need for this combination of skills first hand as a co-founder and former CTO of the business analytics company FirstRain Inc.

He hopes that COS 448 can teach students how to bridge this gap and avoid the tension and animosity he’s seen grow in startups when colleagues can’t relate to one another.

In addition to lectures and course readings that expose students to the different ways startups run, COS 448 also features a number of guest lecturers, including Twitter co-founder Jack Dorsey, to offer students first-hand experience from many different roles within a startup.

“Having that broader perspective I think really helps in building an understanding of how they will fit into a team in the long run,” says Fish, who himself has served an executive role in several companies. “Because companies are built by teams, not traditionally by only one person.”

It’s through one of these guest lectures that Singh says Miasnik, who took the course spring 2020, first connected with Daniel Levin ‘86, former CEO of Box Inc. and member of the CS department’s advisory council, as a mentor for Adora.

Singh says that a number of other startups have also sprung from the COS 448 classroom, including the cryptocurrency company Hiro (formerly Blockstack) valued at over $3 billion.

As for the Adora team, Ward, Miasnik, and Rubin all plan on joining Full Measure as employees and continuing their work on Adora, including building out a mobile web app for the service. Miasnik will also be working with Singh this coming school year on his senior thesis with a focus on recreating startup success.

Growing a startup is a task not for the faint of heart, but for the Adora team it helped expose them to new ideas and challenges, as well as new capabilities they didn’t realize they had.

“Entrepreneurship is something that had never crossed my mind before. I couldn’t even pronounce the word,” says Rubin. “The way I was expressing computer science before was just sort of in classes and through grading… And now I’ve learned so much more about entrepreneurship and something I didn't really know that I could do.