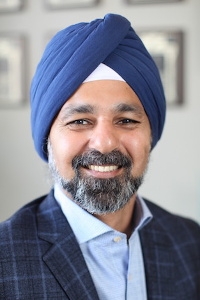 Jaswinder Pal Singh joined the department in 1995 as an assistant professor, became an associate professor in 1999 and was appointed a full professor in 2005. From 2000 to 2005 he was co-founder and chief technical officer of FirstRain Inc., a business analytics company, where he led the development of novel and award-winning technologies and products for precise information extraction from Web pages in the presence of changes, for topic-specific crawling and information discovery, for high-relevance search, and for large-scale content-based publish-subscribe. Professor Singh received his bachelor’s degree from Princeton in 1987 and earned master’s and doctoral degrees in electrical engineering from Stanford in 1989 and 1993, respectively.  Since 2010, he has directed the Princeton CTO Program, which trains students to become highly effective chief technology officers by encouraging understanding not only of technology but also of business and society. Among his honors are the Presidential Early Career Award for Scientists and Engineers (PECASE), awarded by the National Science Foundation, and a Sloan research fellowship, both in 1997.  He is a member of the Association for Computing Machinery and the Institute of Electrical and Electronics Engineers Inc.