Using machine learning to unlock the secrets of butterflies

Artificial intelligence may not seem like an obvious tool for studying butterflies. But for Yael Stochel ‘22, machine learning provided exactly what she needed to understand animal behavior in the wild.

But the patterns are so similar that they create a puzzle: how do these butterflies mimic each other closely enough to deter predators, but not so closely that they confuse each other and interfere with mating? Stochel’s senior thesis research showed that while birds have sharper vision than butterflies, they are unable to distinguish between the two species. Butterflies, on the other hand, are usually able to tell each other apart. 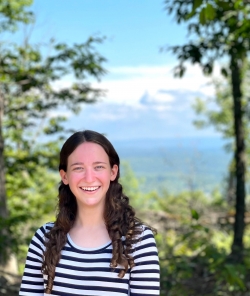 Imageomics Institute at the Ohio State University, which answers biological questions through interdisciplinary methods, also contributed to the project. The butterfly experts at Imageomics helped Stochel eliminate the misleading images of hybrid butterflies from her search and concentrate on the relevant species.

According to Lawrence, Stochel’s determination and openness to feedback were two qualities that helped her create an outstanding research project. “Yael was always seeking to try things and figure out what was possible or needed before coming to me and Dan to ask questions.” She was always “open to feedback, learning and sharing,” he said.

Stochel’s senior thesis not only demonstrates the importance of computer science tools in exploring biological questions, but also helps researchers to better understand how butterflies might be affected by rapidly changing habitats. One result of the work, Stochel said, is to understand how “the changing environments in the regions where these butterflies live potentially pose a threat to the stability of the mimicry system.”

Stochel graduated with high honors, earning her degree in computer science with a certificate in environmental studies. She was elected to membership in Sigma Xi, the scientific research honor society, and awarded a prize for outstanding computer science independent work.