Arvind Narayanan – a computer scientist whose pioneering approach to teaching and research has shaped the study of fairness in algorithms, cryptocurrencies and blockchains, and advanced privacy technologies – has been appointed director of Princeton University's Center for Information Technology Policy, effective July 2023. 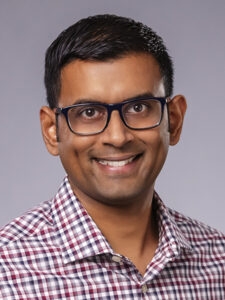 Narayanan, who earned a Ph.D. in computer science at the University of Texas at Austin and completed his postdoctoral research at Stanford University, has a strong relationship with the center’s community of researchers and scholars.

“I owe my career to CITP and I have immensely enjoyed and benefited from being part of this community for 10 years,” said Narayanan, an associate professor of computer science. “I look forward to the opportunity to steward the center and to support and mentor up-and-coming scholars.”

Narayanan also expressed gratitude to CITP founding director, Ed Felten, who retired from Princeton in 2021, and current director Matthew Salganik, a professor of sociology whose three-year term ends in June. “I hope that CITP will aim even bigger in terms of impact while maintaining the academic rigor that we bring to our work,” he added.

Narayanan will be on sabbatical during the 2022-23 academic year. In the interim, CITP will be led by Prateek Mittal, associate professor of electrical and computer engineering. Mittal joined the Princeton faculty in 2013 and is a member of CITP’s affiliated faculty. His work focuses broadly on privacy-preserving and secure systems and his research draws from data science, network science and complex networks, applied cryptography and uncovering potential threats to privacy, such as adversarial machine learning and network attacks.

Mittal will begin serving as director in July 2022, and continue until Narayanan’s term begins the following academic year.

CITP is a joint initiative of the School of Engineering and Applied Science and the Princeton School of Public and International Affairs. It was founded in 2005 as an intersectional hub where technologists, academics, research fellows and scholars with expertise in diverse fields could study how digital technologies impact society, and use their research to help shape tech policy that is ethical and democratic.

Dean of Engineering Andrea Goldsmith said Narayanan brings a wealth of knowledge and an exciting vision to the CITP directorship at a pivotal time for the center.

“The Center for Information Technology Policy is a unique and powerful voice to enhance the role of technology to benefit humanity” Goldsmith said. “The center has grown and prospered under Matt Salganik’s leadership and I am excited for Prateek and Arvind to guide CITP’s next phase of vision and impact. They both demonstrate the broad interdisciplinary thinking and great leadership that are key to driving national policy and research around the role of digital technologies in society.”

Amaney Jamal, dean of the Princeton School of Public and International Affairs, said the work of CITP is critical to advancing public policy.

“Bolstering the data sciences is one of my key priorities as dean,” Jamal said. “CITP is well suited to harness this interdisciplinary field to advance research to improve public policy in service of humanity. The center is a powerful player in the technology policy space, especially thanks to Matt’s fantastic leadership. I look forward to working with Prateek and Arvind who will build upon that good work.”

Narayanan, a popular professor with a large following on Twitter, investigates a wide range of issues around digital privacy and fairness. He led the Princeton Web Transparency and Accountability Project, to uncover how companies collect and use personal information, and helped uncover surveillance on smart TVs. His work has shown how companies can extract individual identities from seemingly “anonymous” data and has helped reveal racial, gender and other cultural biases in machine learning algorithms. In 2019, Narayanan co-authored a large-scale analysis of more than 50,000 web pages to reveal deceptive practices including “dark patterns” that steer users into making unintended and potentially harmful decisions.

CITP, which sits on the third floor of Sherrerd Hall, operates several programs, including a Technology and Society certificate for Princeton undergraduates, a Tech Policy Clinic, a summer internship program for students at universities across the country interested in working in public interest technology, and the Emerging Scholars in Technology program designed to provide training and real-life work experience for professionals interested in careers in public interest technology.