When Yuri Pritykin first arrived at Princeton in 2008 as a computer science Ph.D. candidate, he had little interest in studying life sciences. Today as an assistant professor with a foot in both the computer science department and the Lewis-Sigler Institute for Integrative Genomics, Pritykin is using math and computer science to solve biology’s biggest mysteries. 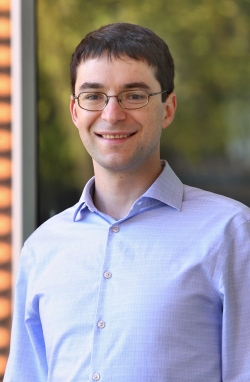 It was during his second year in the program that Pritykin says he realized the breadth of subjects computer science touched and became excited about the opportunity to apply computational techniques to natural systems instead of engineered or abstract ones. Under the wing of Mona Singh, professor of computer science and the Lewis-Sigler Institute for Integrative Genomics, Pritykin set his sights on the study of computational biology.

Singh says that she recognized Pritykin’s talent for scientific inquiry the very first time they met.

“My impression of Yuri has not changed in the entire time I've known him: super smart, passionate about science, energetic, rigorous, modest and nice,” Singh says. “I am thrilled that Yuri has joined our faculty. He is adding to Princeton's considerable existing strength in computational biology… particularly in the context of cancer and immunology.”

For his doctoral thesis, Pritykin used tools from math and computer science -- particularly graph theory -- to study protein-protein interaction networks. These networks describe the complex domino effect of interactions that happen when protein molecules physically contact one another. Using this approach, Pritykin studied dynamic changes in these networks over time. Understanding these changes is crucial information for scientists, like Pritykin, studying the perplexing behavior of cells in our body and can provide insight into how disease develops. He discovered that simple graph-theoretic measurements that can be obtained from static protein interaction networks are in fact reflective of network dynamics.

“It was very attractive to think about the same abstract data structure from theoretical computer science in a context relevant for biology,” Pritykin says. “I think this was the starting point and then I continued with looking at less abstract and much more applied types of data and biological questions.”

After completing his Ph.D. at Princeton in 2014, Pritykin headed to the Memorial Sloan Kettering Cancer Center as a postdoctoral research associate. Although he received such experience already at Princeton, it was during this time that Pritykin says he began to work very closely with experimentalists and move firmly from theoretical to applied work.

“I have been really fortunate to collaborate with a number of amazing immunologists, cancer researchers, and clinicians, to look at versatile data sets and come up with methodology to analyze that data and discover new biology,” Pritykin says.

At Sloan Kettering, Pritykin started to work on developing new computational and statistical methods for analysis of big genomic data. Such data comes from experiments measuring properties of thousands of different molecules in individual cells that collectively provide a lot of information about cell function. But in order to extract this information, new analytical methods are needed, which has been the focus of Pritykin’s work. He particularly focused on studying molecular mechanisms of immune cells. The immune system protects us from foreign invasions and abnormalities such as infections and cancer. But sometimes this protection wanes, as some immune cells become dysfunctional, which results in infections becoming chronic or progression of malignant tumors. Via the integration of previously generated publicly available data from multiple sources and analysis of newly generated data, Pritykin built molecular data resources for T cells, a major subtype of immune cells, and uncovered universal molecular properties of functional and dysfunctional T cells across diseases. This can lead to further research and development of new and improved therapies, and can help basic researchers in further studies of fundamental principles of the immune system.

In addition to genomic data analysis, an important direction in Pritykin’s research has been the development of computational methods for better design of genomic experiments, particularly for genome perturbations. One such experimental technique, CRISPR (Clustered Regularly Interspaced Short Palindromic Repeats), essentially works as molecular scissors that cut the genome at places that an experimentalist desires. This method revolutionized life sciences and already started to prove useful in developments of new therapeutics. But designing such experiments is challenging, most importantly because of the need to avoid CRISPR cutting at unwanted genomic locations. At Sloan Kettering, Pritykin developed an algorithm and popular software for the design of CRISPR experiments that successfully solved this problem.

After six years at Sloan Kettering, Pritykin says he wanted a greater opportunity for interdisciplinary research.

“What attracted me back to Princeton was an opportunity to combine the fundamental and applied approaches to science,” Pritykin says. “Princeton is the leading institution in the world for genomics research, and I am excited to become part of it. Half of my position is in the computer science department and half is in the Lewis-Sigler Institute for Integrative Genomics. This allows me to interact on a daily basis with computer scientists while also interacting with researchers who our Genomics Institute brought together from different departments such as computer science, molecular biology, evolutionary biology, chemistry, and physics.”

“We think about biological problems from all these very different fundamental perspectives, with an eye on clinical applications,” Pritykin continues. “I think it's very exciting.”

One such collaborator of Pritykin’s is Mike Levine, director of the Lewis-Sigler Institute for Integrative Genomics and professor of molecular biology. Levine says that he was first interested in recruiting Pritykin to the Lewis-Sigler Institute because he was already “a leader in the use of computational methods such as machine learning to study big genome datasets.”

It was only as Levine began to get to know Pritykin as a colleague that he realized how fun he could be as well.

“[Yuri] seemed a bit shy and serious at first,” Levine says. “But I now realize that he is quite lively and possesses a great sense of humor.”

In addition to his skills as a researcher, Levine says that Pritykin also has a talent for translating that work to students and getting them excited. This semester was Pritykin’s first teaching at Princeton and his graduate course “Advanced Computational Genomics” was a hit, attracting students from across disciplines and even a few undergraduates. Pritykin says he is in the process of developing with two colleagues a new course on modern genomics that he hopes to debut in the spring of 2023. 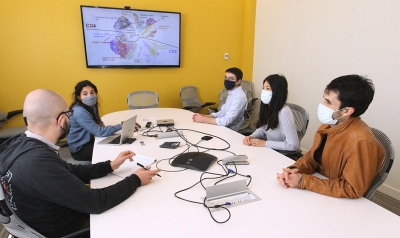 When not in the classroom, Pritykin is working from his lab space at the Lewis-Sigler Institute on developing new computational methods for analyzing big biological data. A core question for Pritykin and his lab is how gene expression is regulated on the single-cell level, particularly in immune cells, and how this can be manipulated eventually in the clinic. This is work that Levine says is striking a note with student researchers at Princeton.

“Yuri's field of research and scholarship clearly resonates with our students,” Levine says. “He attracted three of our best graduate students in the QCB program within months of his arrival at Princeton. I think Yuri has a 'good nose' for interesting problems.”

This is a sentiment that Singh echoes, noting that Pritykin’s unique work is forging new paths for our understanding of the human body and disease.

“By systematically analyzing and 'mining' a diverse set of existing datasets, his findings have important implications in understanding the response of the immune system to chronic infections and cancer,” she said.

Peek into Pritykin’s lab and you might see researchers clicking away on computers or huddled into group discussions, but they share a common pursuit of some of biology's biggest questions, including how our immune system works.

“We hope that this work will help us address very specific questions in biology and medicine which will lead to fundamental and clinical research and development of new therapies for cancer, infectious diseases and autoimmunity.”