By Liz Fuller-Wright, Office of Communications

Why do men have worse outcomes than women from COVID-19? A new study suggests it’s not something wrong with males, it’s something right with females. Specifically, females’ innate immune systems.

A team of researchers from Princeton University, Flatiron Institute of the Simons Foundation, the Icahn School of Medicine at Mount Sinai and the Naval Medical Research Center had begun studying a group of nearly 3,000 members of the U.S. Marine Corps before a COVID-19 outbreak during their training in 2020, and continued to follow them through the infections and afterwards. The results of their study appear in the current issue of the journal Cell Systems. 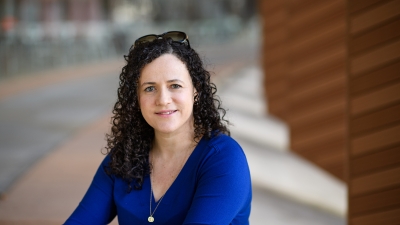 Using RNA sequencing and clinical measure analysis, the research team found that even though infected females had higher rates of symptoms, their average viral load was 2.6 times lower than that of the males. They also identified molecular signatures that pointed to a sex-specific genetic basis for the difference. “Sex-specific responses to COVID-19 are notoriously challenging to study, due to the many confounding variables, including comorbidities, differences in environment, fitness, etc,” said Olga Troyanskaya, a professor of computer science and the Lewis-Sigler Institute for Integrative Genomics (LSI) and director of Princeton Precision Health at Princeton University, the associate director for genomics at the Flatiron Institute of the Simons Foundation, and one of two co-senior authors of the study.

“This study created an unprecedented opportunity,” she said. “This group of Marines training and living together at the base leads to a well-controlled, very large cohort. They’re all about the same age, living in nearly identical conditions, eating similar food. They’re at about the same fitness level. All had similar severity of disease — asymptomatic or mild COVID. The other critical point was that this study includes longitudinal PCR testing, blood collection, and symptoms reporting — leading to data before, during and after their COVID cases.”

“Through a well-controlled longitudinal study of young Marine recruits, we were able to identify sex differences across many metrics, including symptoms, viral load, blood transcriptome, RNA splicing, and proteomic signatures,” said Stuart Sealfon, M.D., the Sara B. and Seth M. Glickenhaus Professor of Neurology at Icahn Mount Sinai and the other co-senior author of the study. “We found that females have higher pre-infection antiviral interferon-stimulated gene (ISG) expression, a wide array of genes that generally function to inhibit viral replication. Our results indicate that these ISG differences could mediate sex differences in response to virus infection.”

Identifying these ISG differences won’t lead immediately to a treatment plan, caution the researchers, but it provides a clear path forward for biomedical research.

“The identification of unique signatures between the sexes will help inform the design of future medical countermeasures that can prevent and treat SARS-CoV-2 infections not only in military recruits but improve global public health as well,” said Commander Andrew Letizia, M.D. deputy director of the Naval Medical Research Center’s infection disease directorate and the principal investigator and an author of the study.

The authors note some limitations to their study, including that the cohort was mainly young, healthy adults and did not include any cases of severe COVID-19, which limited their ability to reach definitive conclusions about the relevance of these findings to older or less healthy individuals or to the development of more severe COVID-19.

Troyanskaya is a computational biologist, using advanced analysis techniques to sift through enormous data sets. That enabled the research team to wade through the many existing hypotheses about the sex differences and find a causal explanation for the differences in outcomes: sex-specific molecular signatures that are present prior to infection. 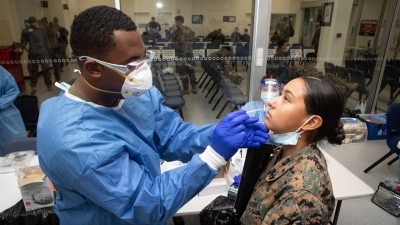 “Women have more active immune systems, even before they get sick,” explained Natalie Sauerwald, one of the co-first authors, a research fellow at the Flatiron Institute and a visiting research collaborator with Princeton University. The other co-first author, Zijun “Frank” Zhang, was also a postdoctoral researcher with Troyanskaya at Princeton and Flatiron before joining the research faculty in the Division of Artificial Intelligence in Medicine at the Cedars-Sinai Medical Center.

“Our analysis indicates that the women’s innate immunity is more activated both prior and during infection, thus helping fight the virus more effectively,” said Sauerwald.

“Remember, symptoms are in part due to your immune system fighting the infection,” Troyanskaya said.

The result is that females feel sicker as they battle the disease, but they have lower viral loads and better outcomes than males with the same exposure.

It was already known that males had worse COVID outcomes, but what made this study unique was that the computational scientists had enough data — and, critically, pre-infection bloodwork — to create a causal model linking sex-specific pre-infection innate immune states to response to infection and outcomes.

“There are many biological differences between men and women,” said Sauerwald. “Men have higher incidence of cardiovascular disease and other comorbidities. There are hormone differences, and many other factors that could potentially explain this male-female difference in COVID. But with our data and modeling, we were able to for the first time show a significant tie between the pre-infection immune level differences between sexes and the outcomes we saw during infection.”

For the COVID-19 Health Action Response for Marines (CHARM) study to investigate the basis of COVID sex differences, the researchers collected and analyzed data from Marine recruits as they began training. A total of 2,641 males and 244 females who were initially SARS-CoV-2-seronegative were followed for 12 weeks with regular symptom screening, PCR testing and blood sampling.

During those three months, which included two weeks of supervised quarantine and 10 weeks of Marine training, a total of 1,033 males and 137 females tested positive for SARS-CoV-2. The study was conducted between May and September of 2020, prior to the release of vaccines or treatments, and none of the participants were enrolled in other clinical trials at the time.

Elizabeth Dowling from Icahn Mount Sinai contributed to this article.