Nagpal and Wissa featured in Nature 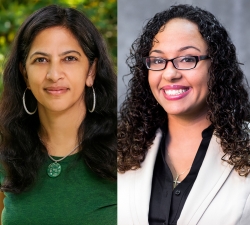 Radhika Nagpal, professor of computer science, and Aimy Wissa, assistant professor of mechanical and aerospace engineering, have been featured in a recent Nature article on bioinspired robots. The article, written by Neil Savage, reports on roboticists who are looking to biology for inspiration in robot design.

Nagpal recounts how inspiration for her work came during her honeymoon snorkeling in the Bahamas:

She was approached by a school of colorful striped fish, moving as one. “They come straight at you and check you out and then move off,” says Nagpal. “I was like, ‘Wow, that is a collective behavior that I’ve never seen.’”

Her mind returned to those curious fish years later, when she was pondering ways to build swarms of robots that could coordinate their behavior in challenging environments. The result is a school of robotic fish — called Bluebots — that can coordinate their activity with their fellows.

Nagpal’s school is small, only ten fish with limited abilities. The fish are equipped with blue LEDs so that their comrades can spot them underwater. Simple rules in their programming, such as swimming to the left when they see another Bluebot, enable them to synchronize their movement. But Nagpal hopes to eventually build larger collectives with more complex behaviors.

Wissa, on the other hand, got some of her inspiration from click beetles, which can jump up to 20 times their body length without using their legs. This skill helps with robotics design since one issue robots struggle with is falling over.

Click beetles use a muscle to compress soft tissue, building up energy; a latch system holds the compressed tissue in place. When the animal releases the latch, producing its characteristic clicking sound, the tissue expands rapidly and the beetle is launched into the air, accelerating at about 530 times the force of gravity. (By comparison, a rider on a roller coaster typically experiences about four times the force of gravity.) If a robot could do that, it would have a mechanism for righting itself after tipping over, says Aimy Wissa, a mechanical and aerospace engineer who runs the Bio-inspired Adaptive Morphology Lab at Princeton.

Even more interesting, Wissa says, is that the beetle can perform this manoeuvre four or five times in rapid succession, without suffering any apparent damage. She’s trying to develop models that explain how the energy is rapidly dissipated without harming the insect, which could prove useful in applications involving rapid acceleration and deceleration, such as bulletproof vests.

Read the full article in Nature.

Nagpal is the Norman R. Augustine '57 *59 Professor of Engineering in the departments of computer science and mechanical and aerospace engineering. She joined the faculty in the summer of 2022. Her research has explored the dynamic movements of fish schools, the highly successful collective decision-making of ant colonies, and the complex architectures of cell tissues. Nagpal and her team develop novel hardware and mathematical approaches aimed at illuminating collective intelligence and expanding capabilities of robots for scientific exploration, structural monitoring and construction, and other applications.

Wissa is assistant professor of mechanical and aerospace engineering. She joined the faculty in January 2022. Director of the Bio-inspired Adaptive Morphology Lab, her research focuses on designing, modeling, and building adaptive bio-inspired structures and systems for robotic applications. These mechanisms are inspired and informed by solutions found in nature and are designed to resolve state of the art engineering challenges.