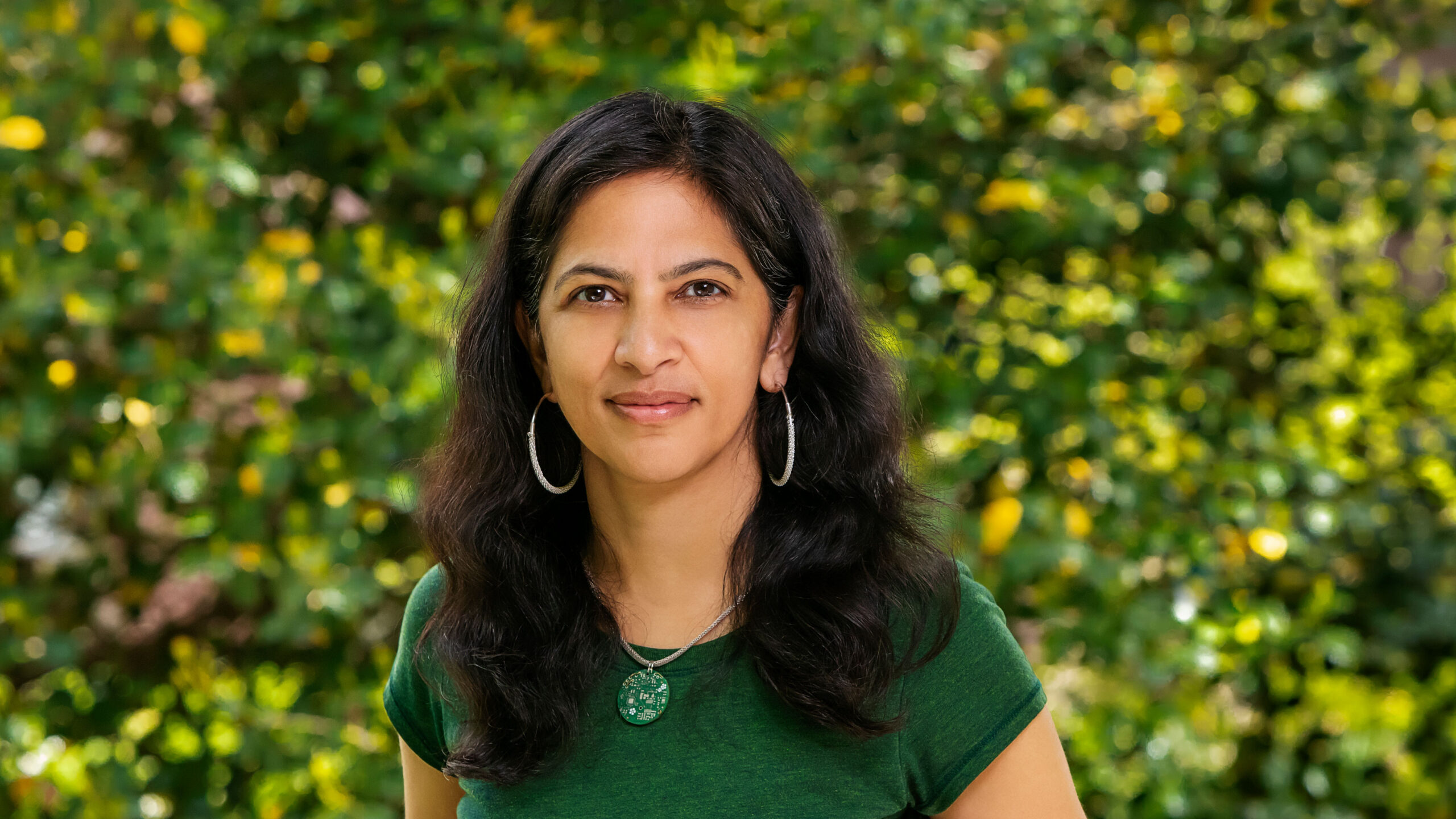 Radhika Nagpal, an expert in bio-inspired robotic systems and collective behavior, has joined the Princeton faculty as a professor of mechanical and aerospace engineering and computer science. On July 1 she was appointed the Norman R. Augustine ’57 *59 Professor in Engineering.

Nagpal joined Princeton in January from Harvard University, where she was the Fred Kavli Professor of Computer Science and a founding faculty member of the Wyss Institute for Biologically Inspired Engineering, launched in 2009. 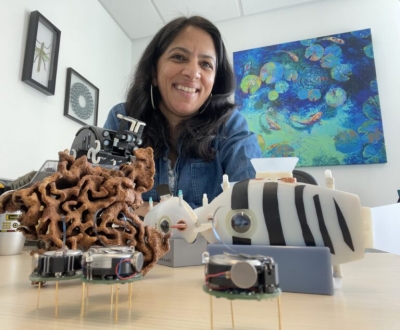 Radhika Nagpal is an expert in bio-inspired robotic systems and collective behavior. Her research has explored the dynamic movements of fish schools, the highly successful collective decision-making of ant colonies, and the complex architectures of cell tissues. Photo courtesy of Radhika Nagpal

Her research has explored the dynamic movements of fish schools, the highly successful collective decision-making of ant colonies, and the complex architectures of cell tissues. Informed by biological systems, Nagpal and her team develop novel hardware and mathematical approaches aimed at illuminating collective intelligence and expanding capabilities of robots for scientific exploration, structural monitoring and construction, and other applications.

Some of Nagpal’s recent work has focused on colonies of army ants, which use their own bodies to build bridges and ladders that are highly adaptable to changing terrain and traffic conditions. In collaboration with biologist Simon Garnier’s Swarm Lab at the New Jersey Institute of Technology, Nagpal’s group used field experiments and simulations to understand how the ants’ self-assembled bridges respond to changes and how individual decisions add up to collective adaptability. Their work was published earlier this year in Nature Communications.

“We’re thinking about ecology as a model for how to do robotics,” said Nagpal. She envisions robot teams that would fit into their environment, minimizing waste and disruption to ecosystems.

Her lab is well-known for the creation of the Kilobots, a swarm of 1,024 coin-sized robots with vibrating motors that can be programmed to self-assemble into particular shapes based on each individual robot’s sensing of its immediate surroundings.

The Kilobots project, published in Science in 2014, was a pioneering demonstration of a low-cost robot collective. “It’s a way of testing ideas for engineered collective intelligence — more real than a simulation, but still an abstraction of a robot,” said Nagpal. These robots have been commercialized and are now used by labs worldwide.

While Kilobots pushed the envelope in manufacturing and coordinating large numbers of robots, the system was “stuck in two dimensions,” said Nagpal. Now, her team is testing schools of 3D-printed, fish-like robots called Blueswarm that can be readily maneuvered in any direction and have a nearly 360-degree view of their surroundings.

“Bigger fish schools are actually more efficient than smaller schools at finding food and evading predators,” said Nagpal. “They get all these group benefits, so we’d like to be able to do that with robots … where each individual is actually doing pretty simple things, but the group itself is so much more powerful than the individual.”

Such robot teams could someday be used to monitor fragile environments like coral reefs. “If we mimic the way fish move and we mimic the way the fish observe and interact, then we could potentially fit into the underwater ecosystem and not just send something in there that is disruptive to the natural environment,” said Nagpal.

She is a principal investigator of a team that was recently awarded a $7.5 million Multidisciplinary University Research Initiatives (MURI) grant from the U.S. Office of Naval Research to improve the speed and efficiency of underwater robot teams.

Nagpal’s lab is also using inspiration from biology to design soft climbing robots that can climb irregularly shaped structures for inspection. With a gripping surface on each end, these robots are inspired by caterpillars, but move by flipping rather than crawling.

Nagpal envisions a team of such robots “climbing all over a structure, constantly filling in gaps or taking care of repairs or building a trail to where something is wrong. You have a lot of simple robots whose only job is inspection, and you could have more complicated robots whose job is repair.”

Her lab is working with NASA to develop climbing robots that could monitor and maintain uncrewed space stations or habitats. To this end, in 2021 her team tested several robots’ functionality on zero-gravity flights. They evaluated the robots’ locomotion and sensing capabilities in simulated Martian, lunar and zero gravity. Nagpal’s group is now analyzing the results from the flight tests. In her new lab at Princeton, they are developing a testbed for climbing robot swarms to explore new ideas for structural health monitoring. 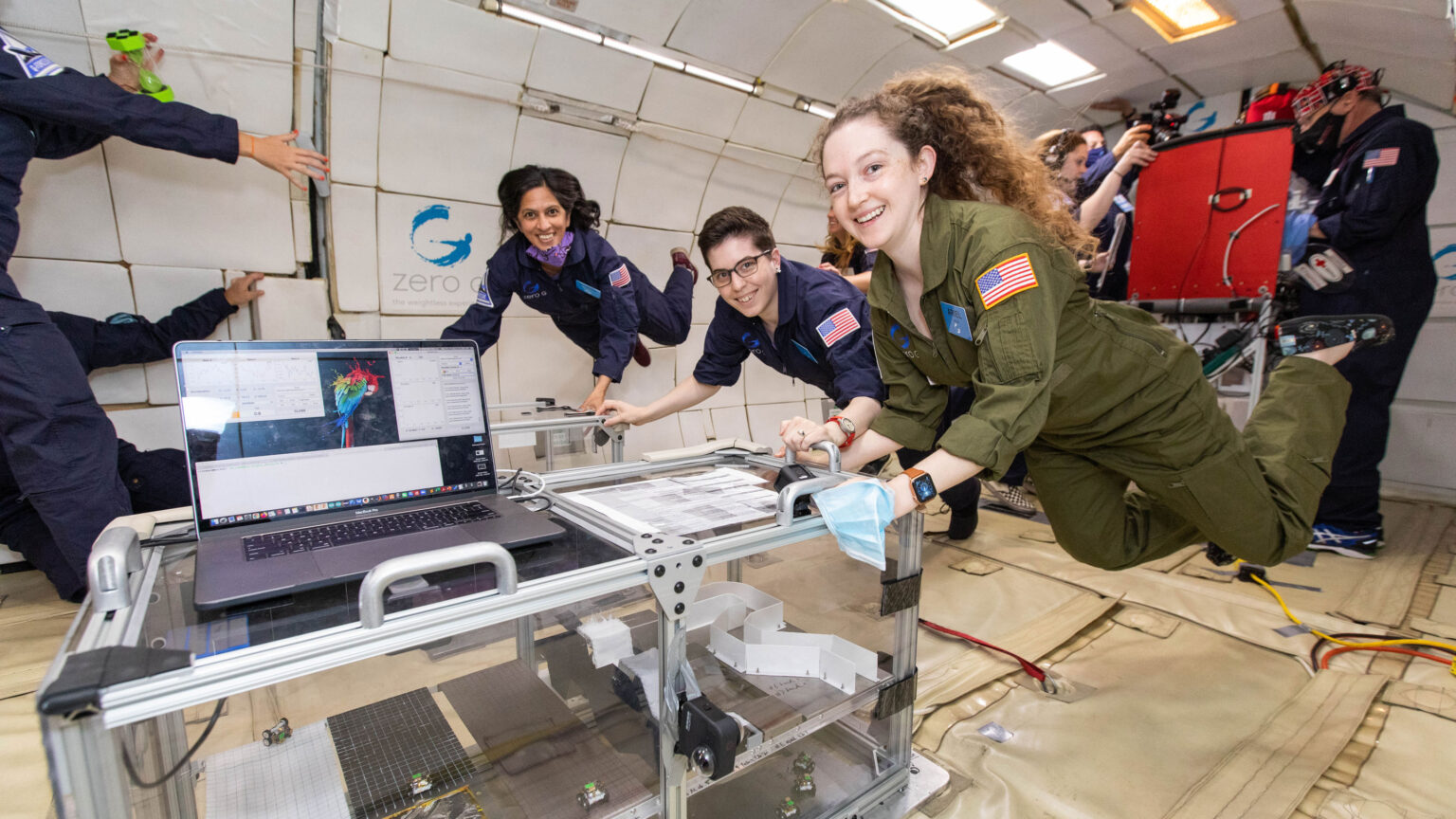 Nagpal (left) and her team are working with NASA to develop climbing robots that could monitor and maintain uncrewed space stations or habitats. In 2021 they tested several robots’ functionality on zero-gravity flights. Photo courtesy of Zero Gravity Corporation

Nagpal was drawn to Princeton for its collaborative, interdisciplinary approach to robotics research. “Architecture, civil engineering, electrical engineering, mechanical engineering, computer science — all of them are invested in robotics and have a stake in it,” she said. “For me, that’s extremely exciting, because it means that there’s so many possibilities for creativity.”

She added that she appreciates the University’s “bold investment” in robotics represented by the collaborative research space at the School of Engineering and Applied Science, opened in 2021.

Nagpal earned bachelor’s, master’s and doctoral degrees in computer science from the Massachusetts Institute of Technology. She is a fellow of the Association for the Advancement of Artificial Intelligence and the Association for Computing Machinery. In 2021, she was selected as one of “America’s Great Disrupters” by Newsweek. Nagpal has also gained attention for her work on diversity and equity; in 2013, she wrote a popular Scientific American blog article about changing academic culture, entitled “The Awesomest 7-year Postdoc.” She cofounded Root Robotics, an educational robotics startup that was acquired by iRobot in 2019.