Margaret Martonosi elected to American Academy of Arts and Sciences

Except from the Office of Communications

Professor Margaret Martonosi is one of eleven Princeton faculty members elected into the American Academy of Arts and Sciences. She is among 276 scholars, scientists, artists and leaders in the public, nonprofit and private sectors elected this year in recognition of their contributions to their respective fields. 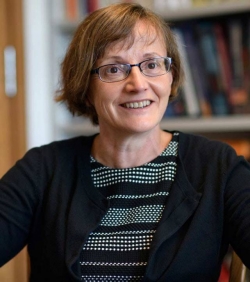 Margaret Martonosi, the Hugh Trumbull Adams ’35 Professor of Computer Science, specializes in computer architecture and mobile computing with an emphasis on power efficiency. She was one of the architects of the Wattch power modeling infrastructure, a tool that was among the first to allow computer scientists to incorporate power consumption into early-stage computer systems design. Her work helped demonstrate that power needs can help dictate the design of computing systems. More recently, Martonosi’s work has also focused on architecture and compiler issues in quantum computing.

She currently serves as head of the National Science Foundation’s Directorate for Computer and Information Science and Engineering, one of seven top-level divisions within the NSF. From 2017 until February 2020, she directed Princeton’s Keller Center for Innovation in Engineering Education, a center focused on enabling students across the University to realize their aspirations for addressing societal problems. She is an inventor who holds seven U.S. patents and has co-authored two technical reference books on power-aware computer architecture. In 2018, she was one of 13 co-authors of a National Academies consensus study report on progress and challenges in quantum computing.

Martonosi is a fellow of the Association for Computing Machinery (ACM) and the Institute of Electrical and Electronics Engineers IEEE). Among other honors, she has received a Jefferson Science Fellowship, the IEEE Technical Achievement Award, and the ACM SIGARCH Alan D. Berenbaum Distinguished Service Award. She joined the Princeton faculty in 1994.