Olga Russakovsky has been selected for the 2020 Anita Borg Early Career Award by the Computing Research Association-Widening Participation (CRA-WP).

The Anita Borg Early Career Award honors the late Anita Borg, who was an early member of CRA-W (before it became CRA-WP), and is inspired by her commitment to increasing the participation of women in computing research. The annual award is given to a woman in computer science and/or engineering who has made significant research contributions and who has contributed to her profession, especially in the outreach to women. 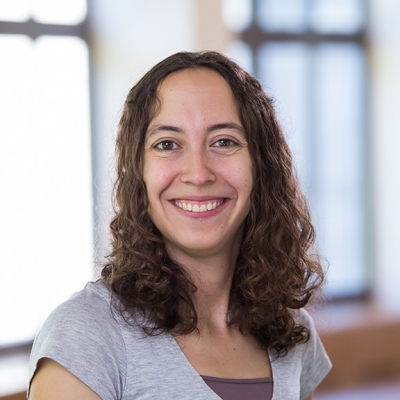 Dr. Olga Russakovsky is an Assistant Professor of Computer Science at Princeton University where she is also affiliated with the Center for Statistics and Machine Learning and the Center for Information Technology Policy. Her research is in computer vision, closely integrated with machine learning, human-computer interaction and fairness, accountability and transparency. She focuses on three primary areas of exploration. The first is developing the fundamental building blocks of visual recognition, such as object detection, image parsing or human activity recognition. The second is designing human-machine interaction paradigms to enable computer vision systems to effectively learn from and collaborate with humans. The third is ensuring the fairness of the vision systems with respect to people of all backgrounds by improving dataset design, algorithmic methodology and model interpretability.

One of her notable research contributions is leading the ImageNet Large Scale Visual Recognition Challenge. This research appeared in the International Journal of Computer Vision in December 2015 and amassed 13,422 citations as of December 1, 2019. Her team was awarded the prestigious PAMI Everingham Prize, and the work was featured in the New York Times and MIT Technology Review. Crowdsourcing contributions of this research also appeared in the premier human-computer interaction conference (ACM CHI) in 2014 and follow-up work on remove cultural stereotypes from the dataset will appear in the ACM Conference on Fairness, Accountability and Transparency (FAT*) in 2020.

She was awarded numerous awards for her research and outreach work in addition to the PAMI Everingham Prize, such as the MIT EECS Rising Star award and NSF Graduate Research Fellowship. She was named one of MIT Technology Review’s 35 Innovators Under 35 in 2017, Foreign Policy Magazine’s 100 Leading Global Thinkers in 2015 and Becominghuman.ai’s 100 Brilliant Women in AI Ethics in 2019. She has served as a Senior Program Committee member for WACV’16, CVPR’18, CVPR’19, NeurIPS’19 and CVPR’20, has organized 9 workshops and tutorials on large-scale recognition, and has given more than 50 invited talks at universities, companies, workshops and conferences.

She completed her PhD in Computer Science at Stanford University in August 2015 and her postdoctoral fellowship at the Robotics Institute of Carnegie Mellon University in June 2017.

In addition to her research, she co-founded and serves on the Board of Directors of the AI4ALL foundation dedicated to educating diverse future Artificial Intelligence (AI) leaders. She was the co-founder and co-director of the Stanford AI4ALL summer camp for high school girls; the camp was featured in Wired and a study on its effectiveness was published in SIGCSE’16. She is the co-founder and co-director of the Princeton AI4ALL summer camp teaching AI technology and policy to underrepresented high school students. AI4ALL has partnered with 11 universities so far to introduce students from underrepresented groups to AI, and launched a free, project-based online AI education program. In addition, she is the co-founder of the annual Women in Computer Vision workshop at CVPR, the monthly Women in AI tea at Stanford, and the monthly Research Inclusion Social Event at Princeton.