Four portraits that capture the broad diversity of Princeton University’s distinguished graduates and pioneers were unveiled Sept. 20 in a ceremony held at Chancellor Green.

Portraits of Denny Chin, Carl Fields, Robert Rivers and Alan Turing were officially revealed to the University community, and to their friends and family in attendance. The paintings will be added to the University’s permanent art collection and featured in prominent locations across campus.

“There’s no doubt that the extraordinary individuals selected have each made an enduring contribution to the life of this University, to the nation, and the world,” said University President Christopher L. Eisgruber. “The subjects of these paintings represent our history, our shared values, and our aspirations and goals for the years ahead. By including them in Princeton’s portrait collection, they help to more fully illuminate the rich story of this great University. They also will serve as a visible expression of Princeton as the welcoming community we are today, even as we continue to strive to become ever more inclusive and diverse in the years ahead.”

The University announced in 2018 it would commission eight new portraits to recognize individuals who, over the past 75 years, have been preeminent in a particular field, who have excelled in the nation’s service and the service of humanity, or have made a significant contribution to the culture of Princeton.

In introducing Eisgruber and delivering opening remarks, Deborah Prentice, University provost and the Alexander Stewart 1886 Professor of Psychology and Public Affairs, made note of the thousands of visitors who arrive on Princeton’s campus each year seeking to engage with its history.

“We value history, and given that, it’s somewhat surprising that we have not always been conscious of and intentional about how we construct our history, and in particular, who gets included in that history and who does not,” Prentice said. “The portrait collection is a case in point. … We’re here today to take one small step to remedying that.”

Turing’s portrait was introduced by Eisgruber and Jennifer Rexford, the Gordon Y.S. Wu Professor in Engineering, professor of computer science and chair of the Department of Computer Science. 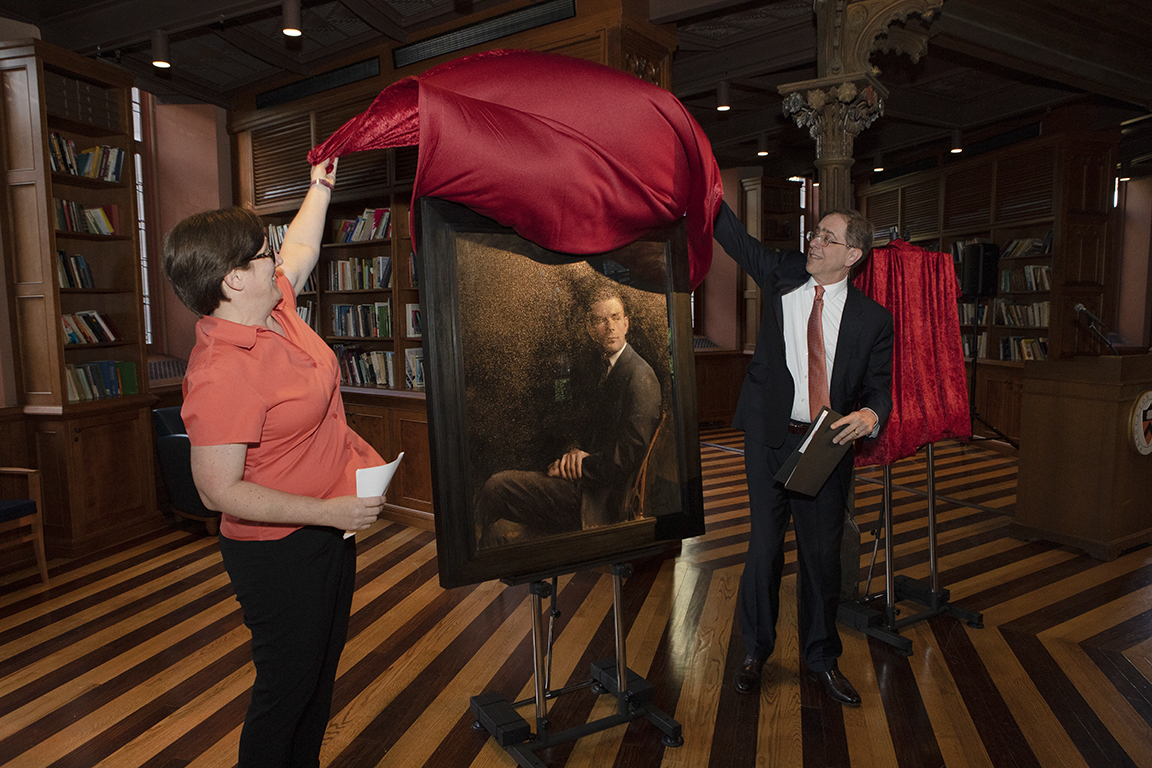 The Alan Turing *38 portrait was unveiled by University President Christopher L. Eisgruber and Professor Jennifer Rexford before an audience in Chancellor Green.

“In the computer science department at Princeton, we owe a tremendous intellectual debt to Alan Turing for our historical strength in theoretical computer science, of course, but also research in artificial intelligence and machine learning, and even working at the intersection of computing with biology, a topic Turing pursued in the last few years of his short life,” she said. “And finally, in the applications of computing to the service of nations and of humanity.”

“For those of us in the LGBTQ community, Turing is an enduring icon, and the growing appreciation of his life and his great contributions to the world are a cause for hope and celebration,” she added.

The Bank of England’s 50-pound note will bear Turing’s image on currency scheduled to enter circulation by late 2021.

The University formed the Portraiture Nominations Committee (PNC) in fall 2017 to solicit and review suggestions for new University portraits. The PNC is part of the Campus Iconography Committee, which is overseeing a number of efforts to update and diversify campus art and iconography.

The Portraiture website has information about all 10 individuals to be recognized with portraits. 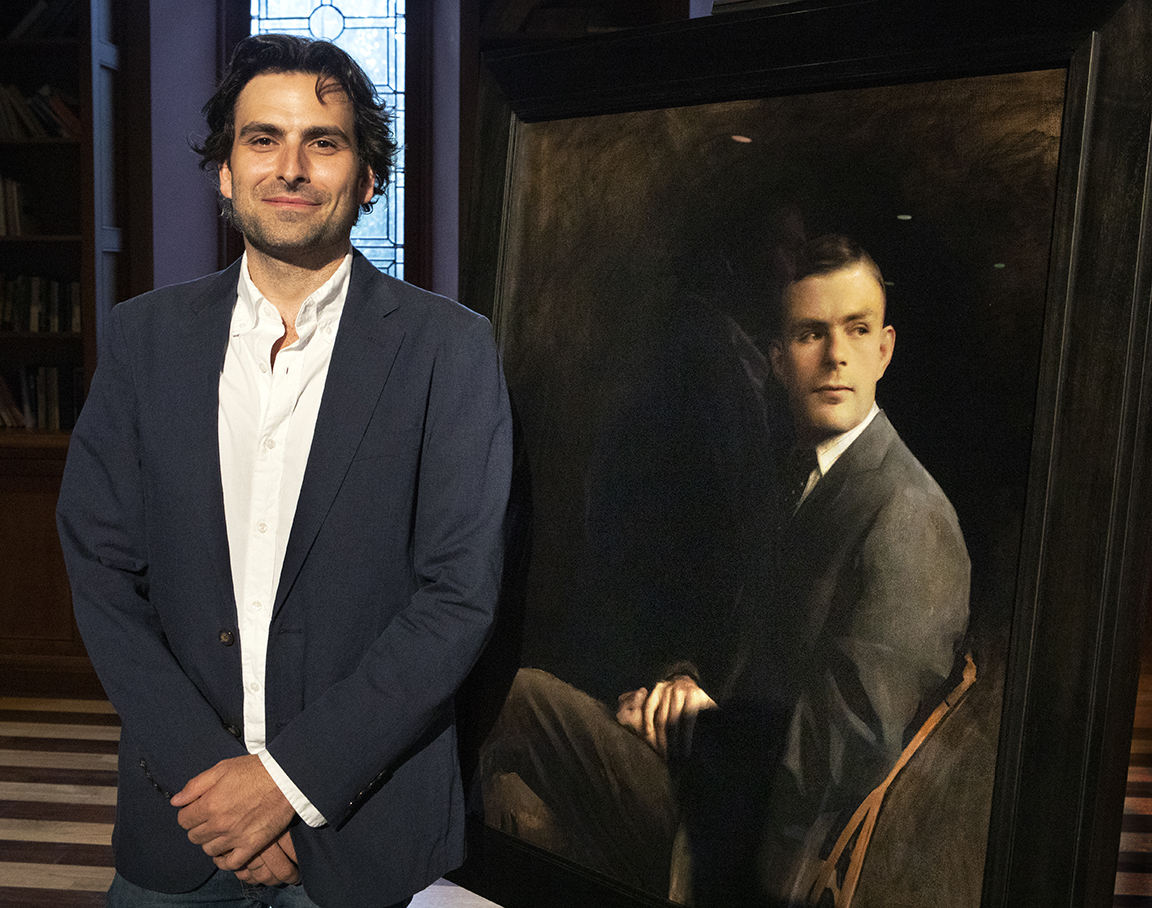 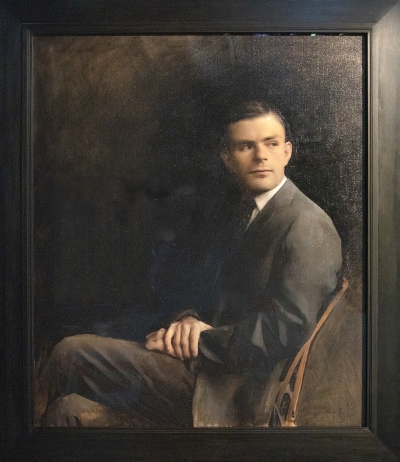 Alan Turing is widely recognized as the father of computer science and is an icon in the history of lesbian, gay, bisexual and transgender (LGBT) rights. He entered Princeton in 1936 following studies at King’s College, Cambridge, and just before the publication of his influential paper, “On Computable Numbers,” in which he envisioned abstract machines (now called Turing machines) that became the basis of modern computers. After earning his Ph.D. in mathematics from Princeton in 1938, Turing returned to his native England, where during World War II he was central to the successful effort to decode the German Enigma ciphers, a crucial development in the Allied victory.

Turing, an openly gay man when homosexual acts were still criminal acts in the United Kingdom, was convicted of “gross indecency” in 1952. In order to avoid prison, he had to agree to undergo a series of estrogen injections. He died two years later from what was believed to be suicide. In 2013, the British government granted Turing a posthumous pardon, following an apology for “the appalling way he was treated,” and now upholds an amnesty law informally known as the Alan Turing law.