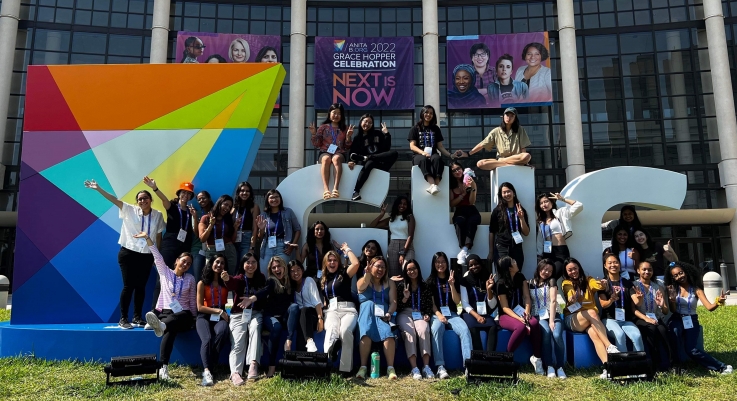 Princeton undergraduates at the Grace Hopper Celebration of Women in Computing. Photo courtesy of Morgan Teman.

The conference is organized by the Anita Borg Institute for Women and Technology and the Association for Computing Machinery and named in honor of Grace Hopper, a rear admiral in the United States Navy and computer programming pioneer.

The computer science department has sent undergraduates to the celebration for over a decade, said Laura Cerrito, undergraduate administrator. The application process to attend typically opens in April each year. Juniors and seniors are eligible to attend, though this year's attendees were all seniors.

For Shayna Maleson, one of the best parts of attending the conference was being surrounded by other women in the field. That’s not something that happens a lot in computer science, she said. “And as a Black woman in computer science,” she added, “I really wanted to go and be in an environment with other diverse women.”

“It’s a really good experience to get to know other women in the field,” said Hien Pham, “and to get a feel for what it looks like to be at various levels of your career in tech.” The career fair at the conference is a draw for many attendees, she added, with lots of employers offering interview slots, though they fill up quickly.

The conference really does feel like a celebration, Pham said, with people chatting in line to get into events or to grab coffee. For Morgan Teman, the networking part was eye-opening. “My conference experience was really shaped by my interactions,” she said, “rather than by the events that I signed up for.”

Reflecting on their experience as computer science concentrators, Maleson, Pham and Teman encouraged students who are interested in computer science to take some courses in the department, even if they have no prior knowledge of the subject.

Teman said that while she took AP Computer Science in high school, she had “no intention” of concentrating in computer science when she arrived at Princeton. Despite being “originally really intimidated,” she decided to take some introductory courses and discovered how much she enjoyed the topic.

While Pham knew she was interested in studying computer science, she didn’t have the opportunity growing up. “I would have liked to learn to program earlier,” she said, but basic computer science resources in her first language, Vietnamese, were limited.

“It can be really intimidating coming into the computer science department here,” said Maleson. “Some people have been programming since they were eight years old and already know 10 different languages.” She had never coded before starting college, she said, and advised other incoming students not to doubt themselves or compare themselves to others. “If this is something that you’re interested in,” she added, “you can learn it and you can be successful.”