Five years ago, the most popular majors for members of the Class of 2011 were economics, politics, history, the Woodrow Wilson School, and operations research and financial engineering. Computer science, which awarded 36 degrees in 2011, wasn’t even close to cracking the top five.

But it has become the University’s most popular undergraduate major, with 130 students in the Class of 2017 pursuing degrees in computer science. That compares to 111 among this year’s seniors.

The increase in student interest is one reason behind President Eisgruber ’83’s recent announcement of 10 new faculty positions in computer science, as well as an emphasis in Princeton’s new strategic-planning framework on strengthening computer science offerings.

Department chair Jennifer Rexford ’91 attributes the expansion to the fact that computer science is transforming fields across every discipline. “Computational thinking is becoming universal as a mode of thought,” Rexford said. “Everything is being transformed by computing.”

Computer science has radically changed the ability of people in other fields to process and analyze large data sets — so that biologists studying variation among species, for example, can compare gene sequences, not just the shapes of birds’ beaks; and financial entrepreneurs can design algorithms to execute high-speed transactions automatically, rather than relying on their personal assessments of individual businesses or trades. 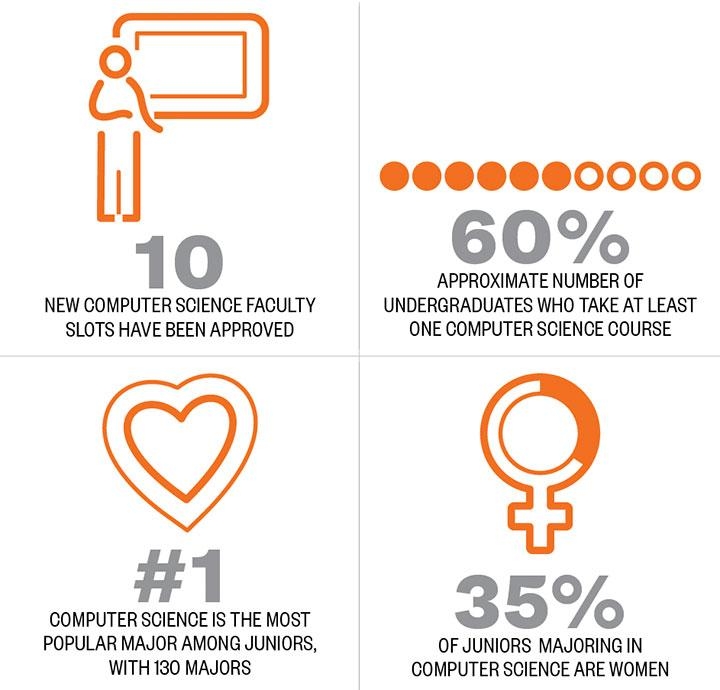 The computer science faculty has strong ties with many other departments, including the Woodrow Wilson School, mathematics, electrical engineering, and biology. “It’s hard to find a field today in science or engineering — or maybe even social science and the humanities — where there isn’t some way that computer science can have an impact,” said H. Vincent Poor *77, dean of the engineering school.

“This is a fundamental intellectual shift,” Rexford said. “It goes beyond just [that] students really want to major in CS so they can get a good job.”

Graduates with computer science degrees are finding jobs in more diverse fields than they used to, Rexford said. “A few years ago, you predominantly saw our students going to Facebook, Google, and Microsoft,” she said. In recent years, “you see a lot more students doing startups and more entrepreneurial activities, and going to smaller, newer companies doing things where technology is a piece of the mission but not the whole focus. We’ve even had people go to work for the current election, doing data analytics for Hillary Clinton.”

Both Poor and Rexford noted the challenges of recruiting and retaining faculty members in the current competitive climate of other universities and companies hiring aggressively in the field; Rexford referred to the recruiting process as “a bit of a feeding frenzy.” Junior-faculty offers in the department have a yield of roughly 25 percent.

Forty-six of the 130 declared majors in the Class of 2017 are women, but there were fewer than 10 when Kay Ousterhout ’11 and Jennifer Kilpatrick ’11 founded Princeton Women in Computer Science (PWiCS) six years ago to bring together women who were interested in the major. Ousterhout is now a Ph.D. candidate at Berkeley, while Kilpatrick is pursuing an MBA and a master’s in computer science at Stanford.

Kilpatrick arrived at Princeton intending to major in classics until she took COS126, “General Computer Science,” in the spring of her freshman year. The course — which convinced her to switch into the engineering school, and eventually declare her major in computer science — features fun, applied projects that were remembered fondly by many alums.

Elizabeth Bradley ’17, who planned to major in politics when she started at Princeton, also switched to computer science after taking COS126 in her freshman year. Taking part in the department’s summer program for students with no programming background prior to college “gave me the confidence that I could survive in my major alongside students who’d programmed for many years,” Bradley said. She plans to attend graduate school in computer science and then work in industry research.

“General Computer Science” is an accessible course even for non-majors, said Michael Pinsky ’15, who majored in psychology but took two computer science classes at Princeton and co-founded social startup Friendsy with classmate Vaidhy Murti ’15. “They were very receptive to non-majors, and the resources that were provided were pretty unbelievable,” Pinsky said of his experience taking COS126. “There are a lot of people who are interested in seeing if they want to be a CS major and a lot of people who just want to learn how to do a little coding, so it’s a nice mix.”

Patrick Wendell ’11, who did major in computer science, is co-founder and head of engineering of Databricks, which provides tools to help organizations process and analyze large data sets relevant to their business. “There’s so much you can appreciate just by understanding the basics of how computing works and what types of problems computer scientists can solve every day,” Wendell said. “It’s great to see that people are seeing computer science as a skill set that is broadly relevant, no matter which major someone’s pursuing.”