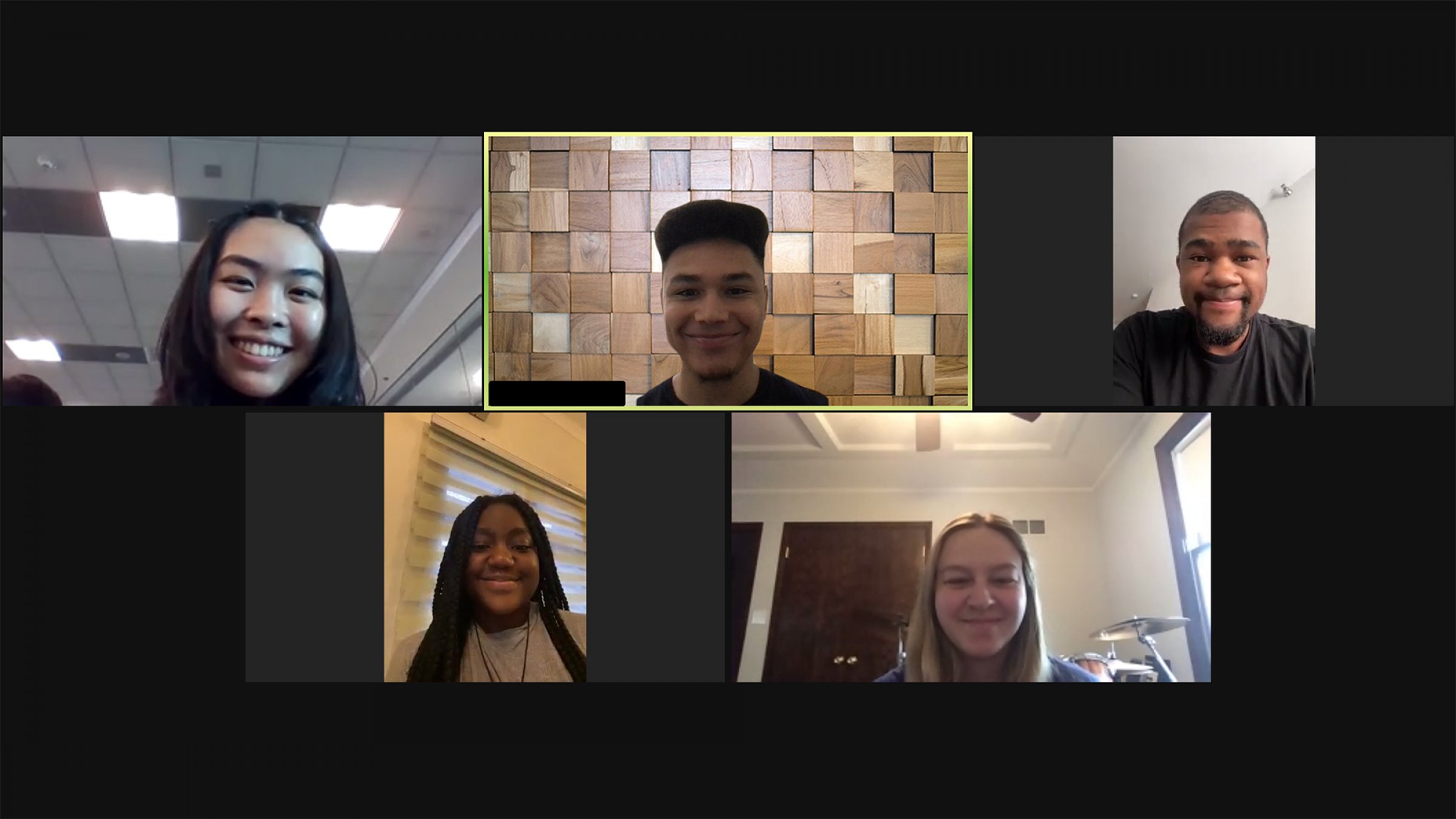 Five scholars from four universities participated in a pilot research program for rising juniors, run jointly by leaders at Intel Corporation and Princeton Engineering. Over eight weeks, organizers introduced scholars to field-leading research problems in computer security and privacy and led talks on how to navigate a career in research.

Isabella Siu had never thought much about the inner workings of computers. But when she started learning how information flows through complex circuits and gates, the world became alive with digital logic.

Elijah Bryant, on the other hand, was drawn to digital machines from an early age. He obsessed over fictional accounts of artificial intelligence, hacking and surveillance. "I've always had an interest in cybersecurity," he said, "messing around with electronics, tinkering with computers."

Siu, at Cornell University, grew up in Miami with parents who held degrees in science and engineering. Bryant, at Iowa State University, comes from San José, Calif. and was the first in his family to go to college. But as rising juniors, in the summer of 2021, their paths converged in a newly launched research experience for undergraduate students run jointly by leaders at Intel Corporation and Princeton University's School of Engineering and Applied Science.

Neither Siu nor Bryant had ever thought of themselves as cutting-edge investigators. Both had assumed college would lead to an industry job that would launch a career in tech. Then something changed in their sophomore years. They grew more curious about their professors' work. Those questions led them to apply to the Princeton-Intel program, where they could encounter first-hand experience digging deep into computer research problems.

Program organizers selected Siu, Bryant and three others from scores of applicants nationwide, then placed the five scholars in one of four research groups across Princeton's electrical and computer engineering and computer science departments. Over the course of two months, the scholars met virtually with dozens of researchers at all career stages, from graduate students to senior scientists. Scholars were given a stipend and paired with several mentors, who guided them through detailed technical topics and provided practical career advice. At the program's end, each of the scholars presented their research findings to a panel of these advisers.

The pilot program was designed to introduce talented young scientists from underrepresented backgrounds to some of the most exciting challenges in computer security and privacy research. These scholars, all U.S. citizens, came from four states and a full spectrum of socio-economic backgrounds. As rising juniors, they were also younger than the typical undergraduate student researcher.

That youth and diversity was the point, according to Princeton's Sharad Malik, the George Van Ness Lothrop Professor in Engineering, who co-developed the program. In his experience, exposing students to research at an early stage is the best way to interest them in a subject. And getting students interested is the only way to strengthen the Ph.D. pipeline to produce a greater diversity of talent for years to come. The field of security and privacy needs to attract more talent than ever, and Malik wanted to find new pathways through which sharp young minds might enter.

By all accounts, the program worked.

"I feel like it was a condensed version of what it would be like if I went to graduate school," said Sarah Schaber, a junior at the University of Illinois Urbana-Champaign, and one of the five scholars. "Like I got a sense for the whole research process and how it would go if this were a really big project."

After eight intensive weeks stripping complex problems to bare essentials and engineering their way back to the start, these scholars began their junior years carrying the spark of a new idea — that they, too, could one day lead a team of researchers in solving the world's hardest technological problems.

All five, reflecting on the program's effect at the end of the summer, echoed Siu when she said: "Now I really want to get involved in research in the fall, and over the next two years. I think a Ph.D. is something I would want to pursue."

The program’s success turned on its mentorship model, according to Intel's Jason Fung, director of offensive security research and academic research engagement, who co-developed the program in conjunction with Malik, with support from Dean of Engineering Andrea Goldsmith.

Organizers paired each scholar with three mentors: a Princeton faculty adviser, an Intel research mentor and an Intel career mentor. "Practitioners who come from many parts of society," Fung said. The mentors guided their scholars in weekly discussions of everything from precise technical matters to broad questions about how and what it means to endeavor in a life of research.

This interconnected model not only afforded the scholars first-hand experience solving problems in advanced topics, it also put them face to face with people who could connect that experience to a future career and its possible impacts on the world at large.

That kind of supportive, experiential environment is essential for success, according to experts at Princeton's McGraw Center for Teaching and Learning. An established body of psychological research shows that feelings of belonging are key for minority groups' academic achievement. Enhancing belongingness can improve performance and has been shown to close achievement gaps by up to 50 percent.

The Princeton-Intel program applies that rationale to the research environment and the workplace. Having mentors who can address difficulties particular to underrepresented groups should help some students feel more like they belong — in a graduate school program, in a research discipline, or in a Fortune 500 company board room.

Fung said one of Intel's biggest priorities is in building a diverse global workforce with an inclusive culture. Fostering diverse perspectives, both technical and personal, allows more room for creative solutions to address the kinds of difficult problems that lie at the heart of computer engineering. To ensure technology is fully inclusive and enriching lives of billions of people around the world, he said industry leaders must act on expanding an inclusive pipeline of young scientists and engineers in shaping next-generation technology.

One of the career mentors, Intel's Christopher Gutierrez, said it was a few early encounters with academic research that had led him into his own career, and that he was compelled to participate in this program by the desire to give back to younger scientists who otherwise might not have access to the role models they need. "I remember being in that position," he said, "with all the mysticism of what comes next. It's exciting, and scary."

That the Princeton-Intel program selected rising juniors, rather than seniors, that it combined mentors from both academia and industry, and that it targeted scholars from underrepresented backgrounds, sets it apart from other programs. It also provides an example for future partnerships, according to Malik, especially between institutions looking to increase both diversity and talent in STEM.

Fung and Malik met in 2013, when they began collaborating on hardware security research. Fung needed a verification methodology that scaled with the growing complexity of new Intel systems, and Malik had developed the techniques for the job. They shared another priority — strengthening their discipline's talent pool by diversifying the pipeline that feeds it — and decided to use their positions to address this need. A major corporation teamed up with a major research university could be as powerful in cultivating young researchers as it was effective in producing world-leading research. They could give the students a comprehensive look at the field. And they could leverage resources from both organizations, namely people who could speak to a broad array of backgrounds and career paths for a diverse group of scholars.

"Ultimately," Fung said, the scholars "may continue their journey to become a professor, researching innovative solutions that the industry can later adopt. Or, after they finish graduate school, they say, Hey, I really want to solve some practical challenges, and Intel is one of the places I want to become an engineer." Fung also sees a chance for these scholars to "pass it along," to turn around one day and create similar opportunities for later generations, as Gutierrez and others did.

For one of the scholars, Roman Gasiorowski, who attends Texas A&M, the program not only introduced him to many areas of security and privacy he hadn't known existed, it also overturned his entire conception of graduate school. "It helped me clear up some misunderstandings about research," he said. "And even had an impact on me changing my career path going forward." Gasiorowski wasn't familiar with how graduate programs are structured, or the value of a master's versus a Ph.D. He thought he would need to go into a lot of debt to continue schooling. Since he was already accruing debt to earn his bachelor's degree, the burden of increasing that debt to unknown quantities had precluded the Ph.D. as an option in his mind.

Weekly conversations with current graduate students and researchers who spanned from early to late-stage career blew those misconceptions wide open. From understanding why someone would want to pursue a Ph.D. to clarifying the process of applying, entering, researching and attaining the final degree, the scholars said this part of the program was key. The new ideas were then reinforced by interactions with the graduate students who helped them navigate the details of their summer research. Julie Yun, associate dean for diversity and inclusion at Princeton Engineering, met with the group weekly and followed up individually to guide students in thinking about grad school as an option.

Malik said demystifying the Ph.D. and introducing students to the process of first-rate research were part and parcel of the program's over-arching intentions. He wanted to create an environment where these scholars could see the highly collaborative nature of research and open their minds to the possibilities of this field. He wanted them to dig into the literature unafraid and bring away the concepts they would need to solve real problems. And above all, he wanted them to meet the people involved in this work.

People whose stories resonated precisely because they did not match the stereotypes. People who could point back at specific steps along the pathways of their own success and say, here, this is what I did. People who could, by their own example, plant a radical notion in the minds of these scholars: that they, as much as anyone, belong at the leading edge of this field.