Mona Singh is tailoring tools to crack the cancer code

When Mona Singh was in high school, she spent two summers conducting research in an immunology lab at the nearby University of Alabama at Birmingham. Singh was an excellent student, and her family hoped she would follow in her father’s footsteps and become a medical doctor. She was interested in the questions of biology and medicine that the lab pursued, but her heart wasn’t in it. Deep down, she wanted to become a math professor — not a doctor. “To be honest, I don’t know if I understood what being a math professor really meant,” she said. “I just knew I liked math.” 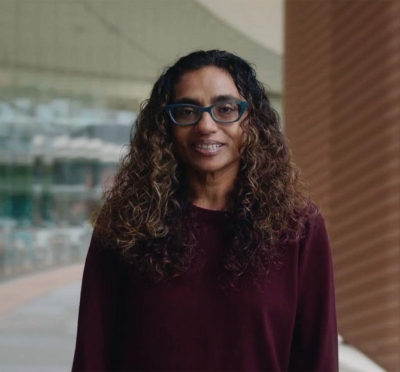 She switched to a biophysics lab, and used the coding skills she’d learned in computer science class to help create an automated collection of data for the lab. “I think that experience planted the seeds for using computer science in molecular biology,” she said. “I really loved the methods of computer science and thinking about things analytically, so it was really exciting to be able to bring what I’m good at to a topic that I thought was really fascinating.”

Today, Singh is a professor in the department of computer science and the Lewis-Sigler Institute for Integrative Genomics at Princeton. Her pioneering research is at the center of a multidisciplinary field that began with the sequencing of the human genome and has advanced exponentially with the application of machine learning techniques. “The genome was just a starting point,” Singh said. “Because biology is being transformed by these high-throughput technologies, you really need advanced algorithms to make sense of massive troves of more diverse data types.”

The crux for computational biologists like Singh is asking the right questions. There is no shortage of data available to researchers, but it’s raw, uncontextualized and multidimensional. “Figuring out how to state the problem is part of the struggle, so that often means changing the type of computational method that you’re using in order to change how we look at the problem,” she said. 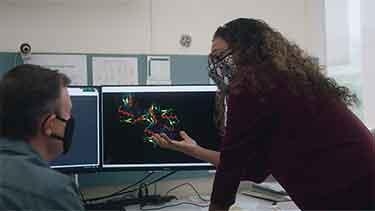 “My group is particularly interested in developing computational methods for making sense of proteins, which are the workhorse molecules of the cell,” she continued. “We develop methods for figuring out what proteins do, what proteins interact with, what protein networks are like. Technology is allowing us to get down to the single cell level, giving us a better understanding of how human cells — and humans as a whole — work.”

Singh began as what she terms a “straight bread-and-butter computer scientist,” earning degrees from Harvard and Massachusetts Institute of Technology. But while working on her Ph.D. at MIT, the Human Genome Project was ramping up and she became fascinated by the possibilities of applying her machine learning skills to biological research. Part of her thesis examined how an iterative learning algorithm could be used to predict aspects of protein structure.

Singh joined the Princeton faculty in 1999, just as the Lewis-Sigler Institute was taking shape. “There wasn’t a building yet,” she said. “I think I was one of the first people working in computational biology to be hired by a computer science department in the country. The department really took a risk, but I felt that there was a lot of excitement here at the interface of biology and computer science.”

She quickly found her groove, and the scientific community at Princeton and around the world took notice of her studies of protein networks. “There was an effort in the computer science department to be looking outward, and being in the Genomics Institute, I had an opportunity to collaborate with chemists and chemical engineers and biologists and statisticians,” she said. She earned a prestigious grant from the National Science Foundation, and in 2001, the White House’s Office of Science and Technology Policy awarded her the Presidential Early Career Award for Scientists and Engineers, the highest U.S. government honor for young scientists and engineers.

Singh soon realized that her groundbreaking research into how proteins interact could have enormous ramifications for the study of diseases, in particular cancer. Once sequenced cancer genomes became available for analysis, Singh combined biological knowledge with computational know-how to uncover cancer-driver genes, genes with specific mutations in cancer genomes that are relevant for disease initiation or progression.

“Someone with lung cancer may have hundreds or even thousands of mutations within their protein sequences, but only a handful are really relevant for disease,” Singh said. “There’s a whole area in cancer genomics and computational biology that is trying to pinpoint what those important mutations are. We know that the cancer that every person has is like their own individual version of cancer, and the idea is that if there’s a drug that treats the specific mutation that they have, then they can avoid chemotherapy and get a tailored treatment that targets those potential disease-driving genes instead.”

Singh’s computational techniques translate across disciplines. Li Chen, a chemistry graduate student in Singh’s computational biology class, heard her lecture on protein networks and realized that her models could advance the research he was conducting on metabolite identification, leading to a collaborative project studying metabolism with Joshua Rabinowitz’s chemistry and genomics lab. Singh also lent her tools to the study of COVID-19, with a recent paper on the “evolutionary arms race between the host cells and the virus,” and how the evolution of both in other animals can provide greater understanding of the history of coronavirus infections in humans.

In a way, Singh has become the math professor she envisioned as a teenager. But her work as a computational biologist has brought her to the forefront of cancer research, with exciting possibilities that may transform the equation for how we deal with a deadly disease. “I would love to be able to find a gene that can be targeted by a drug — to take it all the way to the end and see if there’s clinical application for some of the work that we’ve done,” she said. “Applying the rigorous tools of computer science in biology, in a way, it feels like I’ve come full circle.”

Venture Forward is a mission-driven campaign that is focused on Princeton University’s strengths in the liberal arts, pushing the bounds of knowledge across disciplines, and collaborating to champion inclusion, the humanities, science, art, public policy and technology.