S. Matthew Weinberg, along with two other Princeton faculty members, is among the 126 researchers from more than 60 research institutions in the United States and Canada named as 2020 Sloan Research Fellows. 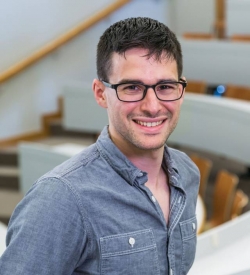 Awarded by the Alfred P. Sloan Foundation, the two-year, $75,000 grants recognize outstanding scientists and scholars early in their careers. Recipients can use the grants as they wish to further their research.

Weinberg, an assistant professor of computer science, joined the faculty in 2017. An expert in algorithmic mechanism design, algorithmic game theory and algorithms under uncertainty, Weinberg received his B.A. from Cornell University and Ph.D. from the Massachusetts Institute of Technology. He received the 2019 Phi Beta Kappa award for excellence in undergraduate teaching.

Sloan Research Fellowships are available to scholars in chemistry, computer science, economics, mathematics, computational and evolutionary molecular biology, neuroscience, ocean sciences, and physics. Candidates must be nominated by their fellow scientists, and winning fellows are selected by an independent panel of senior scholars in their field on the basis of the nominee’s research accomplishments, creativity and potential to become a leader in the field.