Harnessing the Internet of (Too Many) Wireless Things

March 12, 2018
By Doug Hulette
The world’s a noisy place. Think back to the last time you were at a restaurant at the start of dinner rush. You’re sitting with friends and chatting quietly. But as tables start filling up around you, the background chatter grows louder and more intrusive. Soon, normal conversation is a challenge. You find yourself leaning across the table, asking your friends to repeat themselves, even trying to read lips to understand what they’re saying.
The same kind of predicament is cropping up — though a lot of us may not realize it — as homes, offices and the rest of our world become “smart spaces” in which the mundane objects of everyday life become computer-linked: thermostats, wireless camera doorbells, home assistants, you name it. Unlike your dinner conversation, these devices rely on information streams carried via radio waves, but as in the crowded restaurant, too many communicators can lead to crossed signals.
Associate Professor Kyle Jamieson’s goal is a quiet dining room, at least in terms of the wireless world. 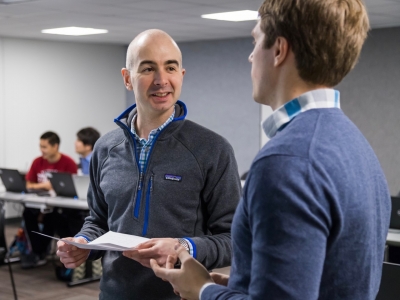 “All these ‘smart things’ make extensive use of all kinds of different wireless networks to have conversations with servers in the cloud, your home network, and other smart things, with analogous unfortunate results,” says Jamieson, who joined the Computer Science Department in 2015.  “Your voice-activated home assistant told your kitchen lights to switch on, but only half got the message because the background chatter from your smart sous vide cooker damaged the message to the rest.
“Ever since industry put a wireless chip in every light bulb and home assistant and sold them in packs of six online, we’ve been poised to exacerbate the problem by multiple orders of magnitude, so soon we’ll be living in a world where we have billions of wireless devices creating a level of uncoordinated background chatter that we haven’t really seen before, ever.”
Jamieson leads the Princeton Advanced Wireless Systems (PAWS) research group, one of whose objectives is to guarantee the reliable flow of data over wireless networks. Recently the University’s Intellectual Property Accelerator Fund awarded funding to Jamieson and his PAWS team for work on a high-density Wi-Fi network to bolster internet access in urban areas and along travel corridors. He came to Princeton after seven years on the faculty of the Computer Science Department at University College London, where he led the Wireless and Networked Systems Lab funded by the European Research Council and the Google Faculty Research Awards program. He earned his Ph.D. from the Massachusetts Institute of Technology in 2008.
In an email exchange, Jamieson talked about his research and its importance:
Is this problem real?
One of the first things I teach systems and networking students is that there’s ample precedent for incommensurate scaling in large systems and networks if you don’t get the design quite right. Take the wired internet as one example. Back in 1986, when traffic volumes on the nascent internet began to significantly increase, the network suffered a series of congestion collapses that required a really careful rethink of the way endpoints controlled their conversations. If you stand back and squint, you can see us headed down a similar path. 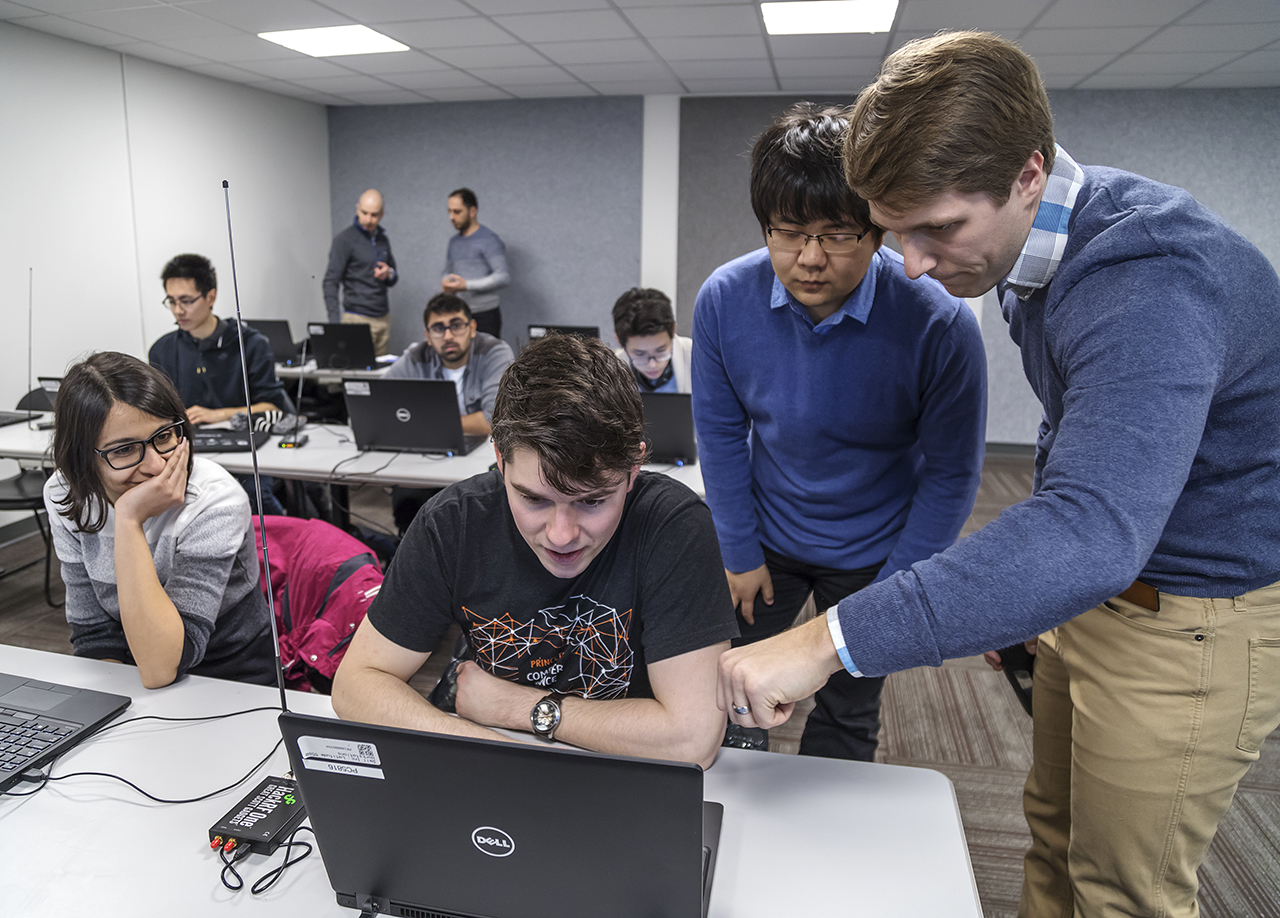 Graduate students Mina Arashloo and Robert McDavid in the COS 463 Wireless Networks software-defined radio laboratory, where students are learning how to build real-world wireless networks from signals, to bits, to packets.

What kinds of techniques are you working on to address the ‘too many things’ problem?
The first broad category involves selectively listening or transmitting in certain directions, rather than the omnidirectional methods commonly used. The analogy would be to cup your hand over your ear and lean toward someone in order to hear what they’re saying, or to cup your hands around your mouth to speak.  When it comes to wireless networks, it turns out that just creating an array of antennas next to each other can accomplish both effects, so that’s why you’re hearing so much in the press these days about Massive MIMO [multiple input-multiple output] as part of 5G cellular networks; the “massive” refers to the number of antennas at a base station and the number of users that base station can support.
How can you focus transmission and reception, and avoid interference, when gadgets are all over the place?
That’s the crux of what makes selective listening or sending difficult, and often it involves making tradeoffs between focusing transmission and avoiding interference.  The key to bringing new ideas out of the laboratory and into the real world is to build and prototype, which is exactly the approach we take in the PAWS group.  We go by Fred Brook’s advice (echoed by Butler Lampson) to “build one [system] to throw one away” and Jerry Saltzer and Frans Kaashoek’s observation that system building inevitably involves encountering emergent properties, i.e. surprises.
What’s changed over the past five years in your area?
Well, some things haven’t changed at all. Wireless has long been the domain of tinkerers and builders since the 60s, when Norm Abramson built a “packet radio” wireless network to interconnect multiple University of Hawaii campuses; to the 90s, when the Ricochet packet radio network put a wireless radio atop every streetlight in cities across the country; and into this century, when wireless neighborhood mesh networks like MIT’s Roofnet experimented with metro-area internet service.
But what’s notable about today’s and tomorrow’s wireless networks is the lack of coordination required. From a certain perspective, no central authority needs to micromanage the network like the more conventional networks your cell phone uses. And the past five years have seen these movements accelerate, with the cost of a commodity Wi-Fi chipset falling to under $5, embedded platforms like the Raspberry Pi being put to myriad uses, and software-defined radios, which let you design and customize the radio as if it were any other piece of software, becoming smaller and less power-hungry. This all dramatically lowers the bar for folks who want to experiment to break into the scene and build the next wireless network, perhaps to better connect all those smart things in your home!