The Alfred P. Sloan Foundation announces the selection of 126 outstanding U.S. and Canadian researchers as the recipients of the 2019 Sloan Research Fellowships. The fellowships, awarded yearly since 1955, honor early-career scholars whose achievements mark them as among the most promising researchers in their fields. Among the recipients are Computer Science Assistant Professors Gillat Kol and Wyatt Lloyd.  A full list of the 2019 Fellows is available at the Sloan Foundation website at https://sloan.org/fellowships/2019-Fellows. 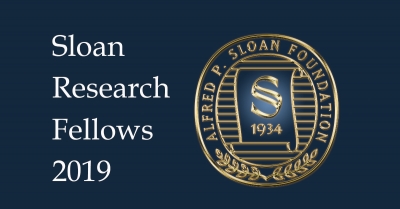 “Sloan Research Fellows are the best young scientists working today,” says Adam F. Falk, president of the Alfred P. Sloan Foundation. “Sloan Fellows stand out for their creativity, for their hard work, for the importance of the issues they tackle, and the energy and innovation with which they tackle them. To be a Sloan Fellow is to be in the vanguard of twenty-first century science.”

Past Sloan Research Fellows include many towering figures in the history of science, including physicists Richard Feynman and Murray Gell-Mann, and game theorist John Nash. Forty-seven fellows have received a Nobel Prize in their respective field, 17 have won the Fields Medal in mathematics, 69 have received the National Medal of Science, and 18 have won the John Bates Clark Medal in economics, including every winner since 2007. A database of former Sloan Research Fellows can be found at https://sloan.org/past-fellows.

Drawn this year from 57 colleges and universities in the United States and Canada, the 2019 Sloan Research Fellows represent a diverse array of research interests. This year’s Fellows include:
• A chemist who is developing high thermal conductivity materials that could halve the energy used in modern computing;
• An economist who is documenting the vast sums hidden in tax havens by the world’s wealthy;
• An ocean scientist who models what will happen when changing open temperatures force previously separated species into the same habitat;
• A computational biologist who is using high powered computation to unearth previously undiscovered antibiotics;
• An astrophysicist who has become a world leader in the search for other worlds;
• A computer scientist who is pioneering the use of video graphics in manufacturing;
• A neuroscientist who studies how common human psychological traits like risk aversion and delayed gratification may have their origins in the dietary ecology of primates.

Open to scholars in eight scientific and technical fields—chemistry, computer science, economics, mathematics, computational and evolutionary molecular biology, neuroscience, ocean sciences, and physics—the Sloan Research Fellowships are awarded in close coordination with the scientific community. Candidates must be nominated by their fellow scientists and winning fellows are selected by independent panels of senior scholars on the basis of a candidate’s research accomplishments, creativity, and potential to become a leader in his or her field. Winners receive a two-year, $70,000 fellowship to further their research.

The Alfred P. Sloan Foundation is a philanthropic, not-for-profit grant making institution based in New York City. Established in 1934 by Alfred Pritchard Sloan Jr., then-President and Chief Executive Officer of the General Motors Corporation, the Foundation makes grants in support of original research and education in science, technology, engineering, mathematics, and economics.