Congratulations to the Siebel Scholars Class of 2019 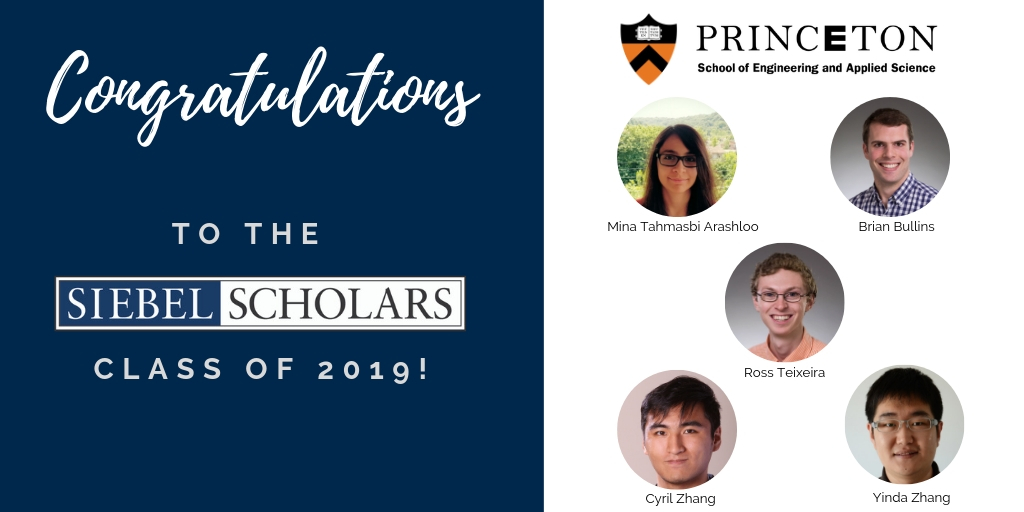 Mina Tahmasbi Arashloo is a rising ﬁfth-year PhD student of computer science at Princeton University, working with Professor Jennifer Rexford. Prior to Princeton, she obtained her B.Sc in computer engineering from Sharif University of Technology in Iran. Her research focuses on real-time network monitoring and control, which is crucial for operating networks at the security and performance level required by today’s online services. Today, network monitoring and control policies are implemented by conﬁguring hundreds of network devices using low-level interfaces that are only suitable for programming a single device. Thus, Mina uses techniques from the programming languages literature to design programming platforms that allow highlevel speciﬁcation of a broad range of network monitoring and control policies, and automatically distribute and implement them across the network. Some of these platforms are designed in collaboration with Microsoft and for large-scale cloud-provider networks, while others focus on Internet service provider and enterprise networks.

Brian Bullins is a ﬁfth-year Ph.D. candidate in computer science at Princeton University, where he is advised by Professor Elad Hazan. Before coming to Princeton, he completed his undergraduate degree at Duke University as a Benjamin N. Duke Scholar, where he received a B.S. in computer science and an A.B. in mathematics. His research interests broadly lie in both the theory and practice of machine learning. In particular, his work on improving matrix estimation techniques has led to new second-order methods for convex and nonconvex optimization for machine learning with provable guarantees. More recently, as an intern at Google Brain, he has developed eﬃcient full-matrix versions of adaptive regularization methods for deep learning.

Ross Teixeira is a rising second-year Master’s student in Computer Science at Princeton University, where he is advised by Professor Jennifer Rexford. He recently graduated from UC Berkeley with a degree in Computer Science and a minor in Music, where he was chosen as a commencement speaker for his graduating CS class. Passionate about teaching, Ross has created and taught material in the form of guest lectures, optional workshops, in-class demos, review sessions and YouTube videos, some of which have gained popularity by the general public. He has led teams of graders and developed assignments and autograders to support classes of up to 1400 students. Ross has also mentored new teachers through department training and Computer Science Mentors, an organization he helped start. This summer, Ross is conducting research on a new system for networking monitoring and analysis using programmable dataplanes, mentoring for AI4ALL and advising the development of a new programming environment for Princeton’s introductory CS courses.

Cyril Zhang is a fourth-year Ph.D. candidate at Princeton University's Department of Computer Science, advised by Professor Elad Hazan. His work is broadly concerned with theory and algorithms for machine learning, with a focus on online learning, convex and non-convex optimization, game theory, and provable methods for learning dynamical systems. More recently, as a research intern at Google Brain, he has focused on bringing theoretical insights from these domains to large-scale applications, including optimization in deep learning, natural language processing, and control theory. Prior to his graduate studies, he obtained a B.S. in Computer Science from Yale University in 2015.

Yinda Zhang is a 5th-year PhD student at Princeton University, advised by Professor Thomas Funkhouser. Before that, he received a Bachelor degree from Dept. Automation, Tsinghua University and a Master degree from Dept. ECE, National University of Singapore under the supervision of Prof. Ping Tan and Prof. Shuicheng Yan. His research area is computer vision, and he worked on a full spectral of 3D vision problems from high-level scene understanding to low-level depth sensing technologies. He has been doing internship at Microsoft Research, Adobe Research, and Google.