By Denise Valenti, Office of Communications 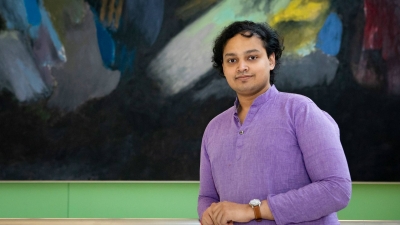 The Jacobus Fellows will be honored at Alumni Day ceremonies Saturday, Feb. 22, at Jadwin Gymnasium.

The fellowships support the students’ final year of study at Princeton and are awarded to one Ph.D. student in each of the four divisions (humanities, social sciences, natural sciences and engineering) whose work has exhibited the highest scholarly excellence. In addition to Singh, the other fellows are Vinicius de Aguiar Furuie (anthropology), Talmo Pereira (neuroscience) and Raissa von Doetinchem de Rande (religion).

Singh, who came to Princeton in 2015, earned a bachelor of technology in computer science from the Indian Institute of Technology, Kanpur.

While these algorithms can potentially negotiate challenging tasks thought to be characteristic of human creativity and ingenuity, they are limited in that they require unreasonably large numbers of interactions, excessive amounts of computation, and are limited to tasks with well-defined or easily specified objectives, Singh said.

“The results in my thesis are aimed at designing principled algorithms for Reinforcement Learning addressing these issues with provable guarantees on computational and statistical efficiency, under reasonable assumptions,” Singh said. “Quite often, distilling down a problem to its mathematical essence enables the exchange and inter-operability of techniques and ideas from diverse fields of study. This is a recurring theme in my thesis, which combines tools from control theory, dynamical systems, harmonic analysis and theoretical computer science.”

In 2018, Singh was awarded the SEAS Award for Excellence. He received the Spotlight Prize at the New York Academy of Sciences’ 12th Annual Machine Learning Symposium and the ICML 2017 Travel Award.

During his Ph.D. work, Karan was instrumental in co-founding a new sub-discipline called non-stochastic control, allowing for the development of new methods for control that are more robust, efficient and general than classic methodology, and that has the potential to make a significant difference in applications, especially in robotics, said Elad Hazan, a professor of computer science.

“Karan is a unique student, not only for his research achievements — not many students get to co-found a new sub-discipline — but also in his breadth of knowledge and generous knowledge and idea exchange,” Hazan said. “This allowed him to collaborate across academic institutions (with faculty from the University of Washington), academic levels (mentoring undergraduates), and with academia as well as industry (Karan was a member of In8 Inc., and a founding member of Google AI Princeton). It is truly inspiring to think of his journey from India to his achievements at the forefront of artificial intelligence research.”

(This story was adapted from a longer version, with details of the other winners, published on the Princeton University homepage.)