Princeton Students gathered to celebrate the 2018 Siebel Scholar Award winners.  The Siebel Scholars program acknowledges leadership, academic achievement, and the collaborative search for solutions to the world's most critical issues. 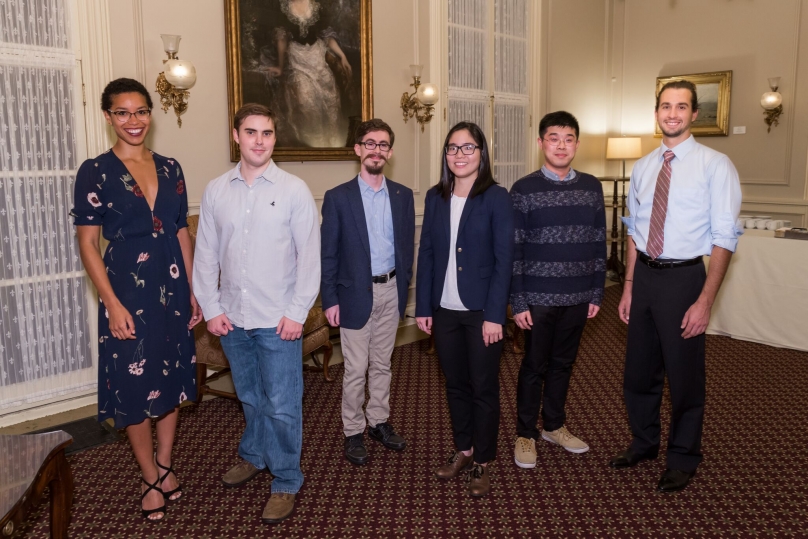 Jonathan received his Master's in Science in Computing Science with Honours of the First Class from the University of Glasgow in June 2013. While at Glasgow, he went on exchange to UC Santa Barbara and undertook summer internships at Samsung Electronics (South Korea), the University of Glasgow, and ARM Ltd (Cambridge, UK). Jonathan started his PhD at Princeton University in 2013 as a recipient of the Gordon Y.S. Wu Fellowship in Engineering. In Professor Wentzlaff’s Parallel Research Group, Jonathan has contributed significantly to the Piton and OpenPiton projects. His verification effort on Piton helped ensure a fully functional chip (an accomplishment for a small academic team’s first chip) and his work to open source OpenPiton created a productive research platform with thousands of downloads from over 70 countries worldwide. In Summer 2016, Jonathan was a research intern at Microsoft Research (Cambridge, UK).

Jieming Mao is a graduate student in Computer Science at Princeton University, where he is advised by Professor Mark Braverman. Before that, he was an undergraduate student at Tsinghua University. He is now doing a summer internship at Microsoft Research New England. He has won the 12th place in the ACM/ICPC World Final and a gold medal in the nInternational Olympiad in Informatics. His research seeks to understand the power of algorithms in strategic or noisy environments with tools from algorithmic game theory, communication complexity and information theory. He recently has been working on projects like multiarmed bandit algorithms in strategic settings, finding topk items with noisy comparisons and communication complexity lower bounds on combinatorial auctions.

Amy Tai is currently a PhD candidate at Princeton University, working with Mike Freedman. Broadly, her research interests include consistency, reliability, and data durability in distributed systems. Previously, she received bachelor degrees in computer science and mathematics at Harvard College, where she worked with Eddie Kohler on the logging infrastructure for an in-­memory database.  She has also collaborated closely with the VMware Research Group as a research intern working on the open-source database Corfu. Currently, she is working on a full-­stack redesign of distributed applications running on top of unreliable flash devices.

Claudia Roberts is currently entering her second year as a Computer Science Master’s student at Princeton University. Claudia, a proud Dallas, Texas native and a GEM Fellow, earned a B.S. in Computer Science from Stanford University, after which she worked at Apple as a Software Engineer for four years. She presented her work at the Apple Worldwide Developers Conference on two occasions. While at Stanford, Claudia worked as an undergraduate researcher at the Transformative Learning Technologies Lab and interned at Cisco and Yahoo!. Recently, she has spent the last two summers at Adobe Research as an engineering intern and has presented her work to the CEO and top-level executives. During her first year as a Master’s student at Princeton, Claudia co-authored a technical paper on anomalous RSA keys in Tor relays and was awarded a faculty-nominated graduate teaching award for her TA service.

Ryan Beckett is a 4th year Ph.D. student at Princeton University working with his adviser David Walker. Ryan received undergraduate Bachelor’s degrees in computer science and mathematics from the University of Virginia. His research interests lie broadly in applications of programming language theory to computer networks. Most recently, he has worked on transferring ideas from software program verification and synthesis to the networking and systems domains. As part of an internship at Microsoft Research in 2016, Ryan developed a network synthesis tool called Propane, which won the best paper award at the ACM SIGCOMM conference that same year. This year, Ryan was one of 33 students world-wide to receive a Google Ph.D. Fellowship for his ongoing research.