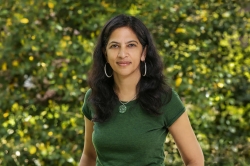 In nature, groups of thousands of individuals cooperate to create complex structure purely through local interactions — from cells that form complex organisms, to social insects like termites and ants that build nests and self-assemble bridges, to the complex and mesmerizing motion of fish schools and bird flocks. What makes these systems so fascinating to scientists and engineers alike, is that even though each individual has limited ability, as a collective they achieve tremendous complexity. What would it take to create our own artificial collectives of the scale and complexity that nature achieves? In this talk I will discuss some ongoing projects that use inspiration from biological self-assembly to create robotic systems, e.g. the Kilobot swarm inspired by cells, the Termes and EcitonR robots inspired by the 3D assembly of termites and army ants, and the BlueSwarm project inspired by fish schools. There are many challenges for both building and programming robot swarms, and we use these systems to explore decentralized algorithms, embodied intelligence, and methods for synthesizing complex global behavior. Our theme is the same: can we create simple robots that cooperate to achieve collective complexity?

Biography: Radhika Nagpal is the Norman R. Augustine '57 *59 Professor in Engineering at Princeton University, joint between MAE and COS, where she heads the Self-organizing Swarms & Robotics Lab (SSR). Nagpal is a leading researcher in swarm robotics and self-organized collective intelligence. Projects from her lab include bio-inspired multi-robot systems such as the Kilobot thousand-robot swarm (Science 2014) as well as models of collective intelligence in biology (Nature Comms. 2022). In 2017 Nagpal co-founded ROOT Robotics, an educational robotics company acquired by iRobot. Nagpal was named by Nature magazine as one of the top ten influential scientists and engineers of the year (Nature10 award, Dec 2014) and she is also known for her Scientific American blog article (“The Awesomest 7 Year Postdoc”, 2013) on academic cultural change.