From Haptic Illusions in Virtual Reality to Beyond-Real Interactions 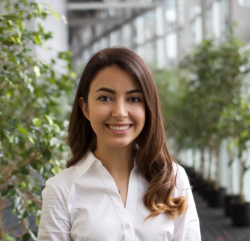 Advances in audiovisual rendering have led to the commercialization of virtual reality (VR) hardware; however, haptic technology has not kept up with these advances. While haptic devices aim to bridge this gap by simulating the sensation of touch, there are many hardware limitations that make realistic touch interactions in VR challenging. In my research, I explore how by understanding human perception, we can design VR interactions that not only overcome the current limitations of VR hardware, but also extend our abilities beyond what is possible in the real world. In this talk, I will present my work on redirection illusions that leverage the limits of human perception to improve the perceived performance of encountered-type haptic devices, such as improving the position accuracy of drones, the speed of tabletop robots, and the resolution of shape displays when used for haptics in VR. I will then present a framework I have developed through the lens of sensorimotor control theory to argue for the exploration and evaluation of VR interactions that go beyond mimicking reality.

Bio: Parastoo Abtahi is a final year computer science PhD candidate and a Gerald J. Lieberman fellow at Stanford University, where she is co-advised by Prof. James Landay and Prof. Sean Follmer. Her research area is human-computer interaction (HCI) and she works broadly on virtual reality interactions and spatial computing. Her research has been published at top HCI venues, such as the ACM Conference on Human Factors in Computing Systems (CHI) and the ACM User Interface Software and Technology Symposium (UIST), and has received two honorable mention paper awards. Her work has been supported by the Stanford Institute for Human-Centered Artificial Intelligence, the Hasso Plattner Design Thinking Research Program, and the VMware fellowship. Prior to Stanford, Parastoo received her bachelor’s degree in Electrical and Computer Engineering from the University of Toronto as part of the Engineering Science program.

This talk will be recorded and live-streamed at https://mediacentrallive.princeton.edu/