Putting together the threads of conversational AI 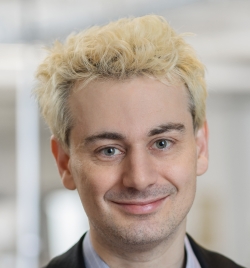 Maybe we don't have enough threads yet to knit together the whole, but let's try anyway! We present our view of what is necessary for conversational AI, and the pieces we have worked on so far to get there. In particular: software (ParlAI, a unified platform for dialogue research), various neural architectures for memory, reasoning, retrieval and generation, and interactive learning, tasks for employing personality (Persona-Chat), knowledge (Wizard of Wikipedia) and perception (Image-Chat), evaluation studies & techniques (Acute-Eval), and a recent competition (ConvAI2). We'll try not to be too pessimistic (!), but we'll also discuss how far we still have to go.

Bio: Jason Weston is a research scientist at Facebook, NY and a Visiting Research Professor at NYU. He earned his PhD in machine learning at Royal Holloway, University of London and at AT&T Research in Red Bank, NJ (advisors: Alex Gammerman, Volodya Vovk and Vladimir Vapnik) in 2000. From 2000 to 2001, he was a researcher at Biowulf technologies. From 2002 to 2003 he was a research scientist at the Max Planck Institute for Biological Cybernetics, Tuebingen, Germany. From 2003 to 2009 he was a research staff member at NEC Labs America, Princeton. From 2009 to 2014 he was a research scientist at Google, NY. His interests lie in statistical machine learning, with a focus on reasoning, memory, perception, interaction and communication. Jason has published over 100 papers, including best paper awards at ICML and ECML, and a Test of Time Award for his work "A Unified Architecture for Natural Language Processing: Deep Neural Networks with Multitask Learning", ICML 2008 (with Ronan Collobert). He was part of the YouTube team that won a National Academy of Television Arts & Sciences Emmy Award for Technology and Engineering for Personalized Recommendation Engines for Video Discovery. He was listed as the 16th most influential machine learning scholar at AMiner and one of the top 50 authors in Computer Science in Science.

To request accommodations for a disability, please contact Emily Lawrence, emilyl@cs.princeton.edu, 609-258-4624 at least one week prior to the event.