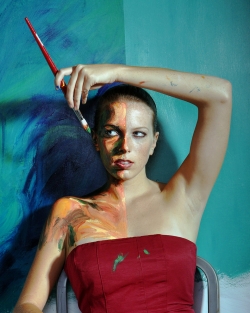 Artist Alexa Meade paints on the human body and three-dimensional spaces, creating the illusion that our reality is a two-dimensional painting. She will discuss her artistic process and collaborations with mathematicians, magicians, and theoretical physicists.

Her groundbreaking work has been exhibited around the world at the Grand Palais in Paris, the United Nations in New York, the Smithsonian National Portrait Gallery in Washington, DC and Shibuya Crossing in Tokyo. Her solo show on Rodeo Drive in Beverly Hills was attended by forty-thousand people. She has created large scale interactive installations at Coachella, Cannes Lions, and Art Basel. Alexa has been commissioned by BMW, Sony, Adidas, and the San Francisco Symphony Orchestra. She painted pop star Ariana Grande for her iconic “God is a Woman” music video, which has about 250 million views.

Alexa has lectured at TED, Apple, and Stanford and accepted an invitation to the White House under President Obama. She has been honored with the "Disruptive Innovation Award" by the Tribeca Film Festival and has been Artist-in-Residence at both Google and the Perimeter Institute for Theoretical Physics. InStyle has named Alexa among their "Badass Women."

FREE & OPEN TO THE PUBLIC