Except by Marie-Rose Sheinerman, The Daily Princetonian

The Wilson School announced the 12 students named to the 2019 cohort of Scholars in Nation’s Service Initiative (SINSI) on Tuesday, Feb. 12. Four current seniors were named graduate scholars, and eight juniors and sophomores will be interns.  The mission of SINSI, founded in 2006, is to “set outstanding individuals on the path toward public service careers in the U.S. government … through academic training that is integrated with work experience in federal agencies.” According to its website, SINSI emerged in response to the fact that the “need for talented and committed men and women to enter public service has never been greater.” 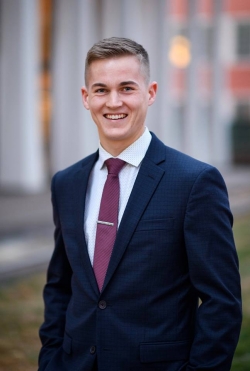 Maya Aronoff ’19, Julia Herrle ’19, Jared Lockwood ’19, and Parker Wild ’19 were admitted to the SINSI graduate program. The graduate program involves two components: a two-year Master’s program in public affairs with a full-tuition scholarship in the Wilson School, and a two-year fellowship with an executive branch department or agency, according to the press release.

The last of the four Graduate Scholars, Wild hails from Brunswick, Maine, and is a senior in the computer science department. He has designed an application that “strengthens electoral accountability by enabling constituents to easily contact their representatives,” according to the Wilson School press release. In a statement to the ‘Prince,’ Wild explained that he could not have imagined being given this opportunity as a junior.  “The breadth of academic interest and prior experience within the SINSI community alone is inspiring,” he wrote.