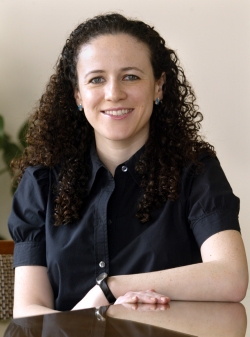 Computer Science Professor Olga Troyanskaya has become deputy director for genomics at the Simons Center for Data Analysis (SCDA), where she has been a consultant since 2013.

In her new role, Troyanskaya is responsible for building and leading a group of junior and senior scientists working on genomics, bioinformatics and their associated applications. She and her colleagues use machine learning, statistics, algorithms, and biology to bring order and understanding to the explosion of information about how life works at the cellular and molecular levels—with an end goal of unraveling the mysteries behind serious diseases.

“Our goal is to illuminate the molecular basis of disease,” Troyanskaya said. “We work closely with experimental and clinical researchers in areas spanning autism, Parkinson’s disease, kidney disease, and breast cancer. The predictive models that we develop can be used to study the effects of genetic and environmental anomalies in cells, and ultimately whole organisms,” e.g, human beings.

The interdisciplinary approach of SCDA’s genomics allows Troyanskaya’s team to extract relevant data — and to eliminate extraneous “noise” — from massive quantities of information that come from diverse sources and studies.

SCDA was launched in 2013 by the Simons Foundation to develop new and innovative methods of examining data whose scale and complexity have historically resisted analysis. The center’s initial focus has been on genomics and neuroscience. Data sets targeted for use by SCDA include neurophysiological data from multi-electrode recordings, imaging data from microscopy, and genomic/proteomic data from various high-throughput technologies.

Troyanskaya is a professor at the Lewis-Sigler Institute for Integrative Genomics at Princeton, where she has been on the faculty since 2003. At Princeton, she runs the Laboratory of Bioinformatics and Functional Genomics.

She has produced many software applications at Princeton, including giant.princeton.edu in 2014. The site is a web-based interactive system for the analysis of tissue-specific protein functions and interactions, providing functional networks in 144 tissues and cell types, and enabling analysis of tissue-specific rewiring. Other recent software releases include seek.princeton.edu, a Google-like search system for thousands of human gene expression datasets, and nano.princeton.edu, a web server for predicting tissue and cell lineage-specific gene expression.

Troyanskaya holds a Ph.D. in biomedical informatics from Stanford University and is a recipient of the Sloan Research Fellowship, the National Science Foundation CAREER award, the Blavatnik Finalist Award, the Overton award from the International Society for Computational Biology, and the Ira Herskowitz award from the Genetic Society of America.