Appel Steps Down as Department Chair after 6 Blockbuster Years 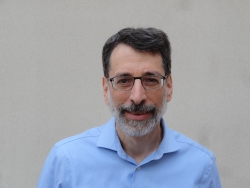 Andrew Appel recalls that his initial goal as chair of the Department of Computer Science was “don’t break anything.”

“We had a fine record, by 2009, of first-class hiring of assistant professors who would produce outstanding tenure cases; of an innovative and well-taught introductory curriculum; of collegiality in faculty making good decisions by consensus; of excellent scholarship overall,” he says. “All those things require attention, they don't just continue by themselves.”

Six years later, as he prepares to step down, it’s clear that Appel succeeded and then some. He not only managed to keep from breaking anything but he also presided over unprecedented growth in the department: an enormous expansion in teaching and student enrollment, the hiring of many new lecturers, and sharp growth in undergraduate independent work and supervising.

The CS department’s phenomenal growth reflected Appel’s second goal, which he says was “imposed on me by the faculty.”

“Personally I might have been content with a department of 25 faculty with 30 undergrad computer science majors in each graduating class, like we had in the old days,” he says. “But many of the faculty of the department made persuasive cases that we must grow.  Generally, the consensus of 10 or 20 smart people is smarter than any individual person, so I figured they must be right and I should act as if we must grow.

“It turned out they were right. In the years since, we've seen the field of computer science experience three kinds of amazing growth: growth in the breadth of scholarship within the field, growth in the significance of CS to scholarship in general and to the world's economy, and growth in undergraduate students wanting to study CS.

“Our department must grow, or risk being left behind as other universities rise to the challenge.”

David Dobkin, an original member of the department when it was formed in 1985 and chair from 1994 to 2003, lauds Appel’s ability to manage the fast-changing situation with a steady hand. “The past six years have been an exciting and challenging time for the department,” says Dobkin, who served as dean of the University's faculty from 2003 to 2014. “This type of growth over a short period is unprecedented in the University.  Managing the growth has been a remarkable feat. Andrew has done a remarkable job of responding to the growth and keeping the ship afloat.”

Professor Jennifer Rexford, who will succeed Appel as chair in July, says, "Andrew shepherded our department during a critical period of unprecedented growth in computer science majors, overall undergraduate enrollment, and collaboration opportunities across campus.

“Andrew reacted quickly and strategically to these challenges, by expanding our teaching faculty, creating a small high-quality master's program, and making the case for a long-term growth of the department,” says Rexford, the Gordon Y. S. Wu Professor in Engineering.  “The success of his efforts have allowed us to sustain the high-quality education we offer to our undergraduate students, while planning for a future where computer science plays an even bigger role in the intellectual life of the University."

Appel, the Eugene Higgins Professor of Computer Science, believes the growth is likely to continue.  “Since the financial crisis of 2008, students have been motivated to study something constructive, where the jobs are,; and most of the job growth in this decade and the next will be in computer science,” he says. “Our intro sequence is challenging but enticing; it's well taught with lots of support for the students; it draws them into the major.

“For students born in the 1990s, computer science is at the heart of the social networks of their lives: person-to-person interaction, web search and the organization of knowledge; games; commerce. None of these kids can imagine life without the computer.  It's no wonder they want to study it.”

Appel’s first term as chair started soon after the financial crisis hit, and he had to navigate the department through a University cash crunch that produced freezes on hiring and salaries. More recently, he has had to cope with new challenges related to hiring and retaining top faculty in a fiercely competitive field.

“As every department nationwide experiences enrollment growth, many universities are hiring faculty, competing for the same pool of talent,” he says. “Big companies and startups ravenously hire computer scientists right from their bachelors and Ph.D. degrees, from that same pool of talent.

“Companies are hiring established faculty away from universities, so those (former) professors are no longer advising the Ph.D. students who will become the new faculty.  When we offer an assistant-professor position to a new Ph.D., he or she has four or five, or eight, other offers.

“Companies and universities are poaching senior faculty from Princeton, and we have hired senior faculty away from companies and other universities. It's an exciting time, but it's also been a real challenge. As our enrollments and majors have quadrupled, and our tenure-track faculty has not, it's become ever more difficult to teach our curriculum and to advise the huge number of undergraduate research projects.

“In the last year or two, the University has allowed us to hire much more aggressively, which is a good thing. But in the face of this cutthroat job market, permission to hire hasn't translated into growing the faculty.  That's been really frustrating.”

For his successor, Appel offers common-sense advice: “The chair doesn't need ‘the vision thing’ (as a former U.S. President so aptly put it). Just listen to your colleagues who have vision, and implement their ideas.  And you get bonus points for accomplishing it all without upsetting too many people.”

“I've been working on a big research project for nine years now, the Verified Software Toolchain,” he says. “We can formally verify the correctness of programs, with machine-checked proofs, reasoning at the source-code level and guaranteeing properties of the machine code.

“Since I've been department chair, I've written and published a book on this; my 18th, 19th, and 20th Ph.D. students, Chris Richards, Rob Dockins, and Gordon Stewart, have graduated; and I have four other current PhD students.  But my little hobby of being department chair has distracted me a bit; I'm looking forward to devoting a lot more time to this research project.”