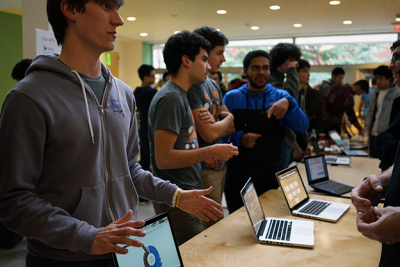 Pop! Pop! It’s just after midnight on Sunday and music is blaring as Rachel Margulies ’16 zips over a swath of bubble wrap on her scooter in the lobby of the Friend Center. Around her, a few other students are dancing along to the music, stomping happily on the bubble wrap.

No, it’s not some misplaced Prospect Avenue party — it’s actually a scheduled late-night stress reliever as part of Princeton’s semi-annual hackathon, HackPrinceton. Gathering more than 500 students from all over the country (and Canada), HackPrinceton is a 36-hour event during which students converge at Princeton to work on software and hardware projects, all while competing for thousands of dollars in prizes. Past projects include piano playing stairs and viral apps like What Would I Say?. “It gives you an excuse to work really hard on ideas you might have had, for prizes,” Margulies says.

Participants are given space to work, along with plenty of food, gear, and mentorship. Margulies and her team have been stationed next to the Apple table (staffed with Apple engineers who offer onsite support to participants) since 4 p.m. “I think we’re doing a lot of learning,” says Eric Principato ’16, one of Margulies’ teammates. “I think we’re doing as much learning as we are coding.”

Margulies and her teammates are working on a project to use Twitter for cloud storage, an idea they came up with on Friday. Margulies is hoping to finish the project by 3 a.m. Principato is less sure. 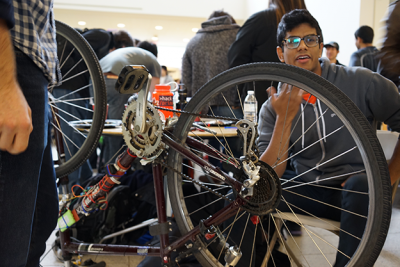 By 10:30 a.m. Sunday, the lobby of Friend has been transformed to the site of bustling science fair, as students pitch their projects to judges, fellow hackers, and interested visitors. Margulies and her teammates are pitching their finished result, TweetBase, only a few feet away from where they were working last night. Principato sheepishly grins, admitting to have not gotten any sleep the night before.

Next to them, a group of Canadian students explains the benefits of GottaGo, an app that crowdsources bathroom locations. It’s their first hackathon, and they chose Princeton at the urging of one of their members, Natan Weinberger, who grew up nearby. “I think Princeton is really awesome, and this hackathon’s pretty well run, so it worked out for us,” says Weinberger, a student at McGill.

Downstairs, there are more projects to be seen. Mini-Med, created by Sreela Kodali ’18, Bertha Wong ’18, and Vivian Mo ’18, is a portable healthcare device that collects biomedical data and displays the information online. “We didn’t know how to make a website before this and we’d never worked with an imp [the hardware and software platform also known as the “Internet of Things”],” Kodali said. “We’ve learned a lot in the last 24-hours.” Mini-Med was the winner of the Best Electric Imp Powered Project.

In all, more than 60 projects were created. Below is sampling of some of the winning hacks from the weekend. The rest can be found at http://hackprincetonf2014.challengepost.com/submissions. 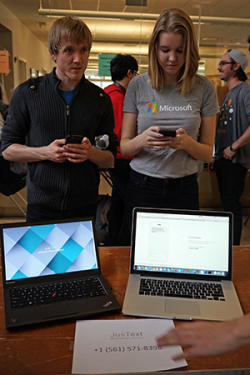 Ethan Gordon ’17 knows the difficulty of sign language communication — and the frustration of having to use writing as an alternative. His experiences communicating with his friend Colin Lualdi ’17 inspired Gordon and his team to create ASLTegra, a sign-language translator, that is meant to help bridge this gap. By signing to a webcam, ASLTegra users can determine which letter is being signed, offering an easy translator for people who may not know sign language.

Thought you were safe sitting in the back of lecture surfing Facebook? Not any more. Collin Stedman ’15’s HostShark captures and visualizes of all the sites that are currently being surfed on the network — even those that you thought you were private. Stedman, who teaches a Web development class on campus, was inspired to create this app to figure out what sites his students were visiting while in class.

Are you one of the few people left with a “dumb phone”? JusText can help. Created by Rohan Doshi ’18, Juan Sepulveda ’18, and Ruiqi Mao, JusText enables cell-phone users to experience the perks of the Internet through text. By texting a designated number with a request, users can receive translations, map directions, stock reports, weather updates, Twitter updates and more. Looks like your phone has just gotten a little “smarter.”