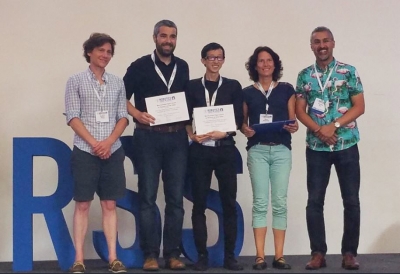 The paper titled "Learning to Throw Arbitrary Objects with Residual Physics" is about "TossingBot," a robot that learns to pick up and throw arbitrary objects into nearby target boxes quickly and accurately.

On the project website, the researchers explain why they decided to tackle the challenge of throwing for a robotic arm stating, "Throwing is an excellent means of exploiting dynamics to increase the capabilities of a manipulator. In the case of pick-and-place for example, throwing can enable a robot arm to rapidly place objects into selected boxes outside its maximum kinematic range — improving its physical reachability and picking speed."

The key idea behind TossingBot is a concept the researchers call “Residual Physics”, which combines simple physics and deep learning to enable the system to train quickly from trial and error and generalize to new scenarios. The researchers explain, “Physics provides prior models of how the world works, and we can leverage these models to develop initial controllers for our robots. In the case of throwing, for example, we can use projectile ballistics to provide an estimate for the throwing velocity that is needed to get an object to land at a target location. We can then use neural networks to predict adjustments on top of that estimate from physics, in order to compensate for unknown dynamics as well as the noise and variability of the real world.”